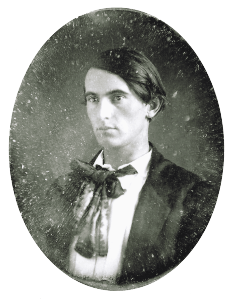 Many of our visitors believe they are related to Lew Wallace. The number of descendants of Lew and Susan Wallace is relatively small. After all, they only had one child. However, Lew’s brother, William, married into the prominent Butler family of Indianapolis and had a large family.

Follow the events of Lew’s life in chronological order.

Lew was fascinated by soldiers and the military, even from a young age. His father, David Wallace, was a West Point graduate. Lew himself served in the Mexican War and the Civil War, and even tried to volunteer for the Spanish-American War. Learn more here.

In September 1878, President Rutherford Hayes appointed Lew as Governor of the New Mexico Territory. As a result, Lew had to deal with the Lincoln County Wars and Apache land disputes. He even interacted with Billy the Kid.

Lew was the author of seven major works. His most famous was Ben-Hur: A Tale of the Christ, the best-selling novel of the 19th century. His other novels were The Fair God and The Prince of India. He also wrote The Life of Gen. Ben Harrison and tried his pen with poetry and play-writing, before writing his lengthy Autobiography.

Susan Arnold Elston was born December 25, 1830, to Major Isaac Compton and Maria (Aiken) Elston in Crawfordsville, Indiana. Susan was the fourth of nine children. She often traveled to be near Lew during the Civil War and his appointments to the New Mexico Territory and the Ottoman Empire. Susan was an accomplished writer herself.

Quotes from Lew’s books and other writings, on the topics of nature, government, the military, education, and more.