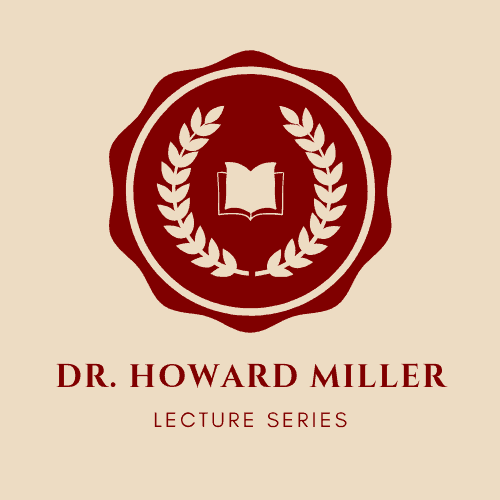 In-person programming at the Study includes lectures on various subjects. In 2019 the General Lew Wallace Study & Museum staff and board of trustees renamed the Adult Lecture Series. Our lecture series will now be known as the Dr. Howard Miller Lecture Series.

We changed the name to honor Dr. Miller’s tremendous contributions to the Study Preservation Society and the museum. He also contributed to Ben-Hur scholarship. As a result, Dr. Miller has benefited the entire Crawfordsville community.

A dynamic speaker and award-winning educator, Dr. Miller is a leading scholar on Ben-Hur and Lew Wallace’s life. A native Texan, he taught at the University of Texas at Austin for forty years, retiring in 2011. During his time at UT Austin, he founded the university’s department of Religious Studies.

Dr. Miller has been involved with the General Lew Wallace Study & Museum since 2000 and is a regular Title Sponsor for the museum’s annual TASTE of Montgomery County fundraiser.

The 1925 Ben-Hur: Epic End to an Era – Dr. Howard Miller – The 1925 Ben-Hur cinematic adaptation marked the end of two eras. MGM’s colossal production epitomized and culminated the tradition of spectacular silent epics. Additionally, the film came at the end of almost six decades in which Wallace’s “Tale of the Christ” was never far from the center of American religious life and popular culture.

The 1959 Ben-Hur: A New Tradition Begins – Dr. Howard Miller – MGM’s 1959 Ben-Hur has been called “the most honored film of all time.” The winner of an unprecedented eleven Academy Awards, director William Wyler’s epic won virtually every international “best picture” award, was seen by millions around the globe, and earned MGM tens of millions of dollars.

The 2016 Ben-Hur – Dr. Howard Miller discusses the 2016 remake and a flurry of Ben-Hur related material during the Indiana bicentennial

“The Sacred Circus”: Ben-Hur on the Stage and the Rails – Dr. Howard Miller joined us from Austin, Texas, this week to deliver a presentation on the traveling Ben-Hur stage play developed by Klaw and Erlanger.

Redeeming Messala: Ben-Hur Beyond the 1959 Epic – Dr. Howard Miller focusses on the ways in which many of the adaptations attempt to forgive and redeem Messala, with results that would have no doubt astounded the General.

A World in Motion: Travelers and Tourists in Ben-Hur – Many of the characters in Ben-Hur go on journeys. Dr. Howard Miller discusses these travels in light of the German bildungsroman, or coming-of-age story, and sheds new light on a fascinating aspect of the novel.

Victorian Travelers and Tourists – In this lecture, Dr. Miller discusses how travel and tourism were central to the success of the literary work of both Lew and Susan Wallace. He talks about the Wallaces’ national and international trips. He also touches on the ways travel influenced their writings and contributed to their celebrity.