This event is free and open to the public and will be held in the Carriage House Interpretive Center. Authors will have books for sale and are happy to sign copies and chat with readers. Several genres of writing are represented. Author guests include historian and biographer Ray E. Boomhower, inspirational author Kelly O’Dell Stanley, dog training expert and fantasy author Laura VanArendonk Baugh, mystery author Garrett Hutson, short fiction author Linda Mansfield, and fantasy author Stephanie A. Cain.

Laura was born at a very early age and never looked back. She overcame her childhood deficiencies of having been born without teeth and unable to walk, and by the time she matured into a recognizable adult she had become a behavior analyst, an internationally-recognized animal trainer, a costumer/cosplayer, a chocolate addict, and of course a writer. Now she is an award-winning writer of speculative fiction, mystery, and non-fiction. Her works have earned numerous accolades, including 3-star (the highest possible) ratings on Tangent‘s “Recommended Reading” list. She admits a mental turning point in her career when she realized she could buy that sexy red Tesla with income from her books!

Laura owns Canines In Action, Inc. where she particularly enjoys working with crazy, over-the-top dogs and arousal/aggression cases. She is also a faculty member of the highly-regarded Karen Pryor Academy for Animal Training & Behavior and is certified in TAGteach for human behavior. She blogs about behavior, too.  Laura speaks professionally on a variety of topics throughout the year, sessions often filling months in advance.

As a fan costumer, Laura is a member of “…And Sewing Is Half the Battle!”, a popular cosplay group active primarily in the Midwest. Laura not only plays characters from sources as varied as video games, Takarazuka productions (Japanese all-female Broadway-style stage shows), Hollywood film, and popular novels, she also teaches workshops on costuming techniques and related topics such as literary influence and history.

Laura has been writing for fun and profit since elementary school, and she credits this hobby with keeping her off the streets and out of worse trouble. Her latest novel, The Songweaver’s Vow, is an award-winning historical fantasy set in the Viking era. You can find her fiction online at www.LauraVAB.com and her dog-training work at CaninesinAction.com.

Ray E. Boomhower is senior editor of the Indiana Historical Society Press, where he is also responsible for the quarterly popular history magazine Traces of Indiana and Midwestern History. Boomhower has been with the Society since 1987, beginning work for the statewide, nonprofit organization as its public relations coordinator.

A native of Mishawaka, Indiana, Boomhower graduated from Indiana University in 1982 with degrees in journalism and political science. He received his master’s degree in U.S. history from Indiana University, Indianapolis, in 1995. Before joining the Society staff, he worked in public relations for the Indiana State Museum and as a reporter for two Indiana daily newspapers, the Rensselaer Republican and the Anderson Herald.

In 1998 he received the Hoosier Historian award from the Indiana Historical Society and in 2010 he was named winner of the Regional Author Award in the annual Eugene and Marilyn Glick Indiana Authors Awards. In 2009 his book Robert F. Kennedy and the 1968 Indiana Primary was selected as the winner in the historical nonfiction category of the annual Best Books of Indiana contest sponsored by the Indiana Center for the Book. His books have also been finalists and received honors in the annual Benjamin Franklin Awards from the Independent Book Publishers Association and Foreword Review’s Book of the Year Awards.

Boomhower’s next projects includes two books set for publication in 2018: Mr. President: A Life of Benjamin Harrison, a youth biography of the twenty-third president, and Indiana Originals: Hoosier Heroes & Heroines, a collection of his work over the past thirty years. You can find him on Twitter and Facebook.

Stephanie graduated from Purdue University with a Bachelor of Arts in History and Creative Writing, with a Medieval Studies minor. She also has two-thirds of a Master of Library Science, but ran out of money and enthusiasm for grad school at about the same time. Despite this, her years of work in libraries were not wasted–besides having a lot of librarian friends (everyone should have at least one) she also spent a great deal of time hanging out in the stacks at 398.2, which gave rise to many of her urban fantasy stories.

She currently works at the General Lew Wallace Study & Museum, where she spends her time doing historical research, giving tours of a Victorian man-cave, and serving as a one-woman IT department.

A proud crazy cat lady, Stephanie is happily owned by Eowyn, Strider, and Eustace Clarence Scrubb. In her free time, she enjoys hiking (except for the spiders), bird-watching, visiting wineries, and collecting anything with owls on it. She likes to unwind by playing World of Warcraft and Skyrim. She enjoys organizing things, is overly fond of 3-ring binders, and visits office supply stores for fun. She owns way more movie scores and fountain pens than she can actually afford.

In addition to her own novels, Stephanie will be selling copies of New Richmond, IN: A History of the Greatest Little Town on Earth, written by her grandmother, Phyllis Waye Boone. Learn more at www.StephanieCainOnline.com.

Michele Israel Harper spends her days as an acquisitions editor for L2L2 Publishing and her nights spinning her own tales. Sleep? Sometimes…

She has her Bachelor of Arts in history, is slightly obsessed with all things French—including Jeanne d’Arc and La Belle et la Bête—and loves curling up with a good book more than just about anything else.

Author of Wisdom & Folly: Sisters, Zombie Takeover, Beast Hunter, Kill the Beast, and the soon-to-be-released Silence the Siren, Michele prays her involvement in writing, editing, and publishing will touch many lives in the years to come. Visit www.MicheleIsraelHarper.com to learn more about her.

Garrett Hutson was born in Indianapolis, and has lived most of my life there. He attended Ball State University from 1989 to 1993, completed a major in French and a minor in Spanish, and graduated with a Bachelor of Arts.

In 1992 he spent a semester in France, studying at LaSabranenque language center and doing restoration work on a 12th century chateau, while living in a restored medieval village. He also studied history at Butler University from 1997 to 1998.

Garrett has a grown daughter, Paige. His husband Dave is a veterinarian, and they have several pets—dogs, cats, parrots, fish, and back-yard chickens. They live in Broad Ripple, a very walkable and eclectic area on the north side of Indianapolis, where they frequent several of the independent restaurants.

In his spare time, Garrett enjoys traveling, reading, watching movies, attending the theater, playing with his dogs, and spending time with friends and family.

Hutson writes upmarket historical mysteries and spy fiction. He writes about ordinary people in different times and places who struggle with faith, family dysfunction, and all of the moral gray areas of life. He writes realistic fiction, so his work is always diverse and LGBT-inclusive. Find him online at GarrettHutson.com.

Indianapolis-based Linda Mansfield wrote the Two Good Feet series of fictional, seasonal short stories for teenagers through senior citizens, male and female. Each of the series’ four books—Stories for the 12 Days of Christmas, Twelve Stories for Spring, Twelve Stories for Summer, and Twelve Stories for Fall—contains a baker’s dozen of stories to provide light reads for entertainment. Each book can stand alone, but the characters are consistent throughout and as a whole the series offers 52 stories, or one for every week of the year. The Christmas book is a great stocking stuffer or hostess gift, and the series is ideal for that hard-to-buy-for person—or yourself!

Linda writes fiction for fun. Her background is as a reporter, editor and public relations director, primarily concentrating on motorsports. She owns Restart Communications, a motorsports PR firm. She has represented several IndyCar drivers and two overall winners of the Rolex 24 Hours of Daytona. She is also a veteran reporter for Speed Sport Magazine. Other articles she wrote have appeared in The New York Times, The Wall Street Journal, and USA Today, among other publications. She’s also worked at a Manhattan publishing house. More info is available at LindaMansfieldBooks.com.

Kelly O’Dell Stanley is the author of Praying Upside Down and Designed to Pray. A graphic designer who writes (or is it a writer who designs?), she’s also a redhead who’s pretty good at controlling her temper, a believer in doing everything to excess, and a professional wrestler of doubt and faith. She offers free prayer prompt calendars at kellyostanley.com and calls small-town Indiana her home.

The Hoosier Author Fair is free and open to the public. For more information about the event and the authors participating,

We were fortunate to have Wallace Scholar Dr. Howard Miller with us in March for the Historic Artcraft Theatre’s screening of the […] 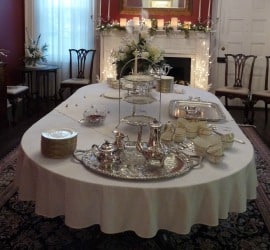 Can you believe it’s already November? Time goes so quickly…before you know it, it’ll be Christmas! Which reminds me, our Holiday Tea […]

The 2011 exhibit, Agents of Deterioration, officially opened with a members’ sneak preview Friday night. Guests looked carefully to find one of […]