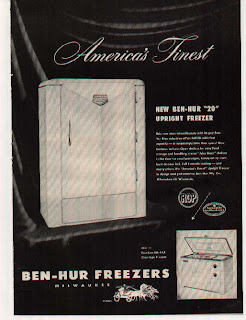 connection between the popularity of Lew Wallace’s masterwork and the rise of new novels made into films. One aspect of the Ben-Hur legacy is merchandising in a variety of franchises and media – books, films, comics, you name it. Just as Mel Brooks immortalized in the film Spaceballs, after Ben-Hur rose to great fame they came out with Ben-Hur the children’s books, Ben-Hur the action figures, Ben-Hur the hairpins, Ben-Hur the freezer…and on and on. Merchants figured they could sell just about everything imaginable by attaching the name of a popular novel to the products. The concept has continued into modern literature and films as merchants continue to market lunchboxes, posters, and clothing by attaching images of popular media. It all comes back to Ben-Hur.