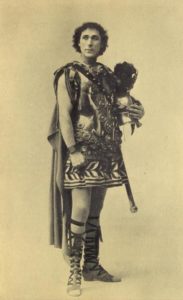 In his autobiography (My Life East and West), William S. Hart (Messala) related some of his memories of the stage production of Ben-Hur. Hart remembered that at one of the final rehearsals prior to the opening of the show, Charles Frohman, a renowned actor at the turn of the century known as the “Napoleon of Drama” announced to Klaw and Erlanger, the producers of the Broadway version of Ben-Hur. “Boys, I’m afraid you’re up against it—the American public will never stand for Christ and a horse race in the same show.” (Frohman was killed years later in the sinking of the Lusitania.)

William S. Hart gained fame in Hollywood after his stage career faded playing in Westerns. His ability with horses in the movies was no act. A gifted horseman, he raced Messala’s team on stage over 400 times. He said he always felt bad that his four horses (Tom, Jerry, Rosie, and Topsy) raced Ben-Hur’s team of four bays every night and lost. His horses tried with all their might every night to win. No matter how hard they tried, the race always ended the same way. Just at the moment it looked like they would win, Judah’s treadmill sped up and the bays drew away—winning the race.

A Mishap on Stage

Hart described one night when the race was reaching its climax. The eight horses ran for all 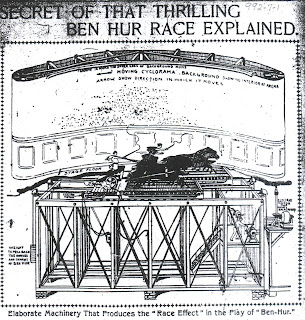 they were worth. Hart’s (Messala’s) horses raced faster and faster, stretching until their bellies were almost on the treadmill—and then Hart realized that his team was going to win. He crawled out on the chariot tongue; put his hands on their backs imploring them, urging them to slow so Ben-Hur could win. But “…They ran like creatures possessed—their veins stood out like ropes—they were out in front—they were gaining! They strained every muscle to the breaking point, then they lunged ahead in a deathlike dash! And—they won! They Won!”

After 400 tries, his team finally out-raced the treadmill.

Hart was always proud that after the first performance, he was sent for and Lew Wallace singled him out, telling Hart: “Young man, I want to thank you for giving me the Messala that I drew in my book.”

William S. Hart was one of the most successful early film stars. Hart passed away in 1946 and left his estate to the people of Los Angeles because the community had treated him so well. His Spanish Revival mansion with its outstanding collection of western art, Hollywood memorabilia, and Native American artifacts and its surrounding 260 acres are now part of the Natural History of Museum of Los Angeles.