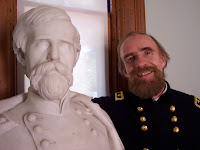 One of Montgomery County’s famous faces will be leading this year’s Crawfordsville Christmas Parade on Sunday, December 7.

“We’re delighted to ride alongside General Wallace during the Christmas parade in his hometown,” said Catlin-Legutko. “It’s an honor for our organization to be a part of this great holiday tradition.”

This honor comes during the General Lew Wallace Study and Museum’s most successful years to date. This year, the Museum was awarded the National Medal for Museum Service, the highest honor for museums who make their communities better places to live. Catlin-Legutko and Petrie will accept the Medal during a special presentation by a Crawfordsville City Council member in front of the courthouse square at the beginning of the day’s events. After the presentation, Catlin-Legutko and Petrie will ride alongside “Wallace” in a carriage at the front of the parade.

O’Bryan, a member of the Mid States Living History Association, has portrayed Wallace before at July’s Civil War Encampment weekend, and again during the second Taste of Montgomery County in September.