First Lady Laura Bush will award the General Lew Wallace Study and Museum the 2008 National Medal for Museum and Library Service, the nation’s highest honor for museums and libraries, at a White House ceremony on October 7. 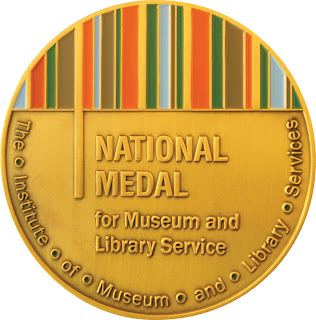 Each year, the federal Institute of Museum and Library Services (IMLS), in coordination with the White House, presents the National Medal to five museums and five libraries that have helped make their communities better places to live. Each winning institution also receives a $10,000 award.

The National Medal is the nation’s highest honor for museums and libraries that help make their communities better places to live. The General Lew Wallace Study and Museum is one of only five museums in the United States and its territories to receive the medal this year and only the second museum in Indiana to receive this award since its inception.

IMLS awards the National Medal to 10 institutions annually for outstanding community outreach programs. The General Lew Wallace Study and Museum received the award for its Lew Wallace Youth Academy, which incorporates Wallace’s life story into lessons in problem solving, creating art, and serving others; its Taste of Montgomery County event that created an economic engine for small businesses in the Montgomery County area and brought new people to the museum’s campus to celebrate local food and music; and its participation in the public forum “Build a Better Downtown.”

Additionally, the Museum has ensured the lasting legacy of General Wallace with the recent rehabilitation of his carriage house as an Interpretive Center complete with a state-of-the-art collections storage facility. Through exceptional educational programming, collaborations with local and state organizations, active collections care, and community development opportunities, the General Lew Wallace Study and Museum fulfills its mission to “celebrate and renew belief in the power of the individual spirit to affect American history and culture.”

“We are deeply moved by this award. The museum staff and board have worked diligently to connect with our community and we believe we’ve made positive transformations in our members, program participants, and visitors. To have this work commemorated with the National Medal is an incredible honor,” said Cinnamon Catlin-Legutko, Director of the General Lew Wallace Study and Museum.

“By its example, the General Lew Wallace Study and Museum shows us the kind of influence and impact that museums can have on community life. Through its innovative programs and active partnerships, the Museum addresses the urgent and changing needs of the community it serves,” said Anne-Imelda M. Radice, IMLS Director.

The National Medal awards are made every year by IMLS, the primary source of federal funding for museums and libraries. Each organization will also be honored in an upcoming ceremony in Washington, D.C., and will receive a $10,000 award. This is the second year that IMLS has awarded medals to 10 institutions. In previous years, the National Medal was known as the National Award for Museum and Library Service and was awarded to three museums and three libraries. Additional information about the 2008 National Medal winners may be found at http://www.imls.gov/news/2008/092908.shtm.

Institute of Museum and Library Services

The Institute of Museum and Library Services is the primary source of federal support for the nation’s 122,000 libraries and 17,500 museums. The Institute’s mission is to create strong libraries and museums that connect people to information and ideas. The Institute works at the national level and in coordination with state and local organizations to sustain heritage, culture, and knowledge; enhance learning and innovation; and support professional development. To learn more about the Institute, please visit www.imls.gov.