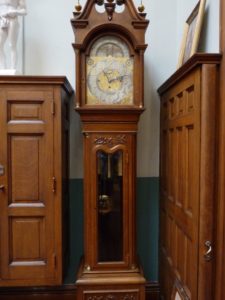 Archaeologists have found evidence that clocks have existed as early as 400 BC. Clocks running on water existed in China. The Greeks invented early mechanical clocks in the 1st century BC. In the early 13th century clocks even had alarms set on them to make a motion or sound at the same time everyday. These clocks often called monks to prayer or meals. These signals were fixed. In order to change them you had to change the fundamental mechanisms of the clock itself.

It was also around this time that scholars find references to clocks made of gears and weights. These clocks worked in much the same way as the water counterparts in their use of gravity, but now there was a physical weight instead of pouring water. Ultimately, clocks stayed the same for hundreds of years, until the advent of microchips and digital technology.

So where, you ask, does Lew Wallace factor into all of these useless clock factoids? Well, the clock has undergone several innovations and improvements, one of which is the advent of the snooze button. Some people have mistakenly credited this to General Lew Wallace, but this just is not true. Says one blogger (http://www.thebluesmokeband.com/alarm.clocks.php), “Stated simply: the snooze button has left me less than satisfied. Given this, I naturally wanted to find a place to lay blame. Who better than the inventor of the snooze button: Lew Wallace.”

A careful examination of the history of the clock and its many assets shows us why this just cannot be, but first we must absolutely decide what the snooze button really is.

The snooze button allows the clock owner to set an alarm on his/her clock. When the alarm signals the proper time, the owner has the option of resetting that clock for a prescribed amount of time. It is possible to reset a mechanical alarm and even to do so with little effort, but it involves actually changing the alarm time. You cannot patent an action like that, so the snooze button must also involve the owner triggering some kind of predetermined signal that does not necessarily have to go off. This kind of manipulation of a clock was only really available until the General Electric-Telechron in 1956. Not too much later the digital revolution changed clocks forever.

General Wallace died in 1905, a full 51 years before the first marketed snooze alarm. He also could not have invented the alarm itself because an Ottoman engineer, Taqi al-Din, writes about a mechanical alarm clock in his book, The Brightest Stars for the Construction of Mechanical Clocks, which was published somewhere around 1556.

Even in the United States the first clock patent goes to Eli Terry On November 17, 1797. It is just not possible for Lew Wallace to have invented the snooze alarm and in fact his own clock is a weight-driven Tiffany timepiece that is still functioning at the Museum.

Researched and written by museum intern Will Finney, Wabash College ’10

One thought on “Lew and the Snooze Button”