We here at the Museum like to monitor what’s being said about Lew Wallace around the internet, and most of what we find is accurate and interesting. One of the more prevalent fallacies, however, is the story that General Wallace was an atheist who wrote Ben-Hur to disprove Christianity. Here is my reply to one blogger:

General Wallace was never an atheist. According to his Autobiography, published posthumously in 1907, he wrote that he was raised in the Christian tradition but wasn’t a devout follower: “At that time, speaking candidly, I was not in the least influenced by religious sentiment. I had no convictions about God or Christ. I neither believed nor disbelieved in them.” 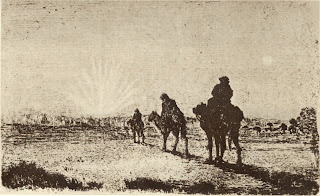 And Ben-Hur originally was to be a story about the three kings that attended Christ’s birth:

” ‘Now when Jesus was born in Bethlehem of Judea in the days of Herod the king, behold, there came wise men from the East to Jerusalem, saying, Where is He that is born King of the Jews? For we have seen His star in the east, and are come to worship him.’ “Far back as my memory goes of things read by or to me, those lines took a hold on my imagination beyond every other passage of Scripture. How simple they are! But analyze them, and behold the points of wonder! ”

It was a chance train ride with Capt. Robert Ingersol that solidified Wallace’s desire to closely examine the life of Jesus:

“It is possible to fix the hour and place of the first thought of a book precisely enough; that was a night in 1876. I had been listening to discussion which involved such elemental points as God, heaven, life hereafter, Jesus Christ, and His divinity. Trudging on in the dark, alone except as one’s thoughts may be company, good or bad, a sense of the importance of the theme struck me for the first time with a force both singular and persistent. “My ignorance of it was painfully a spot of deeper darkness in the darkness. I was ashamed of myself, and make haste now to declare that the mortification of pride I then endured, or if it be preferred, the punishment of spirit, ended in a resolution to study the whole matter, if only for the gratification there might be in having convictions of one kind or another.”

Wallace later said that through the research and writing of Ben-Hur, by learning of the story of Christ, “I found myself writing reverentially, and frequently with awe.”

So although Wallace never intended Ben-Hur to be a debunking of Christianity, he still found himself transfixed, and transformed, by the life of Jesus Christ.

Another misconception is that General Wallace traveled through Europe to do research for his book when in reality he had never visited the region prior to the book’s publication. According to his Autobiography: 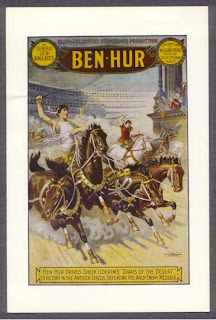 “In the next place, I had never been to the Holy Land. In making it the location of my story, it was needful not merely to be familiar with its history and geography, I must be able to paint it, water, land, and sky, in actual colors. Nor would the critics excuse me for mistakes in the costumes or customs of any of the peoples representatively introduced, Greek, Roman, Egyptian, especially the children of Israel. “Ponder the task! There was but one method open to me. I examined catalogues of books and maps, and sent for everything likely to be useful. I wrote with a chart always before my eyes – a German publication, showing the towns and villages, all sacred places, the heights, the depressions, the passes, trails, and distances. Travelers told me of the birds, animals, vegetation and seasons.”

Later, when Wallace was appointed Minister to the Ottoman Empire, he traveled the region extensively and found that the geographical areas that he had written about were largely accurate. Imagine doing that in the late 1870s, with nothing but books and charts to aid you! That’s just one of the many things that impress me about General Wallace.

As always, if readers want to know more about the fascinating life of General Wallace, they can visit our website, https://www.ben-hur.com/, or give us a call at the General Lew Wallace Study and Museum, 765-362-5769. We’d be happy to tell you all about our favorite guy!