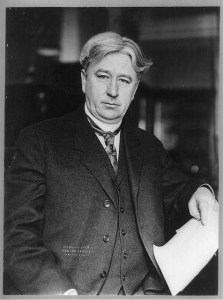 Charles B. Landis was a close friend of Lew Wallace. He also happened to be a United States Congressman elected from the 9th District near Delphi. Landis was born in Logansport and was an 1883 graduate of Wabash College. After graduating he worked on the Logansport Journal, but moved to Delphi in 1887 when he purchased the Delphi Journal.

He served six terms in Congress from 1897 through 1909. As a newspaper man, Landis also served as the president of the Indiana Republican Editorial Association in the 1890s. After leaving Congress he worked for the du Pont Powder Company in Delaware. The paths of Wallace and Landis crossed frequently from the 1880s through the turn of the 20th century.

On February 14, 1905 Congressman Landis contacted J.J. Insley of Crawfordsville asking him to secure a copy of Ben-Hur with an inscription from Lew Wallace. Lew graciously acceded to the request and wrote on the flyleaf:

“Charles B. Landis—our mutual friend, J.J. Insley sends me this book for autographing. He wishes to present it to you. You already know my deep regard for you and circumstances that make compliance with our friend’s wish a sovereign pleasure. Success to you in everything you undertake. There are rewards in good lives, and you are in the way of reaping them—go in that way. Lew Wallace, Crawfordsville.”

As it turned out, this testimony to a trusted friend is believed to be the last thing written by Wallace, who died quietly the next day, February 15, after a long illness.