MGM’s 1959 Ben-Hur has been called “the most honored film of all time.” The winner of an unprecedented eleven Academy Awards, director William Wyler’s epic won virtually every international “best picture” award, was seen by millions around the globe, and earned MGM tens of millions of dollars. On Thursday, July 26, 2018, at 7 p.m., Ben-Hur expert Dr. Howard Miller visited the General Lew Wallace Study & Museum to deliver a lecture entitled “The 1959 Ben-Hur: A New Tradition Begins.”

Dr. Miller’s lecture analyzes the ways in which Wyler, a celebrated director of intimate chamber movies (Mrs. Miniver, Wuthering Heights, and The Letter), demonstrated that a thrilling and spectacular blockbuster could have, at its vital center, a compelling tale of affecting human relationships. In addition, it focuses on the novel’s villain, the Roman Messala, who will be at the center of the new tradition that the 1959 Ben-Hur inaugurated and that continues to this day. Concluding the lecture are twenty minutes of film clips from the 1959 epic.

Dr. Miller’s lecture ties in with the General Lew Wallace Study & Museum’s 2018 annual exhibit, Lights, Camera, Epic! Ben-Hur on Screen and Beyond. The exhibit discusses the four motion pictures made of Ben-Hur—in 1907, 1925, 1959, and 2016—as well as other adaptations, marketing, and the continued legacy of Lew Wallace’s epic novel.

Dr. Miller graciously allowed us to go live on Facebook during his lecture, and we are now sharing the video here for your enjoyment. 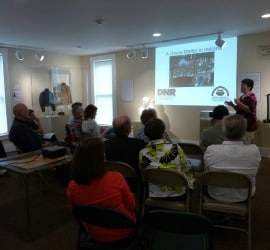 Happy September! We have a busy fall planned. We’ll blog about all of these events in more detail later, but for now, […]

Carol Wallace, Lew Wallace’s great-great-granddaughter, visited Crawfordsville on September 8. She drew a record crowd for her discussion of Ben-Hur and growing […]

We frequently receive questions by e-mail relating to Lew Wallace, and I received one today asking whether or not Lew Wallace wrote […] 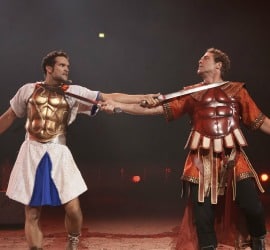 The majesty of Lew Wallace’s Ben-Hur has been captured in music a number of times over the years. The 1899 stage production […]