It’s always thrilling to scrape away the covering of years and unveil more of what General Wallace’s surroundings looked like when he lived among them.  The past weeks have offered exciting glimpses into both the interior and exterior of the General’s study, through the tireless work of some true professionals.

Brian Fick and Mary Yeager of Acanthus Arts in Indianapolis have been hard at work conserving the beautiful decorative paint in places inside the study, and it’s been amazing to watch the original colors begin to blossom.  The anteroom just inside the front door is swathed in deep jewel tones, and the dome now has a wide stripe of original paint uncovered down to the bookcases.  Visitors can now see not only the musical motif in the southeast corner of the dome, but the stylish method by which the paint fades from a deep green to a light silvery tone at the dome. 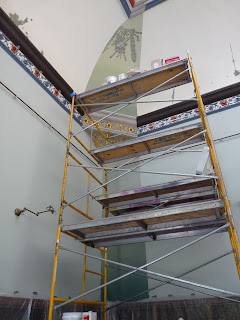 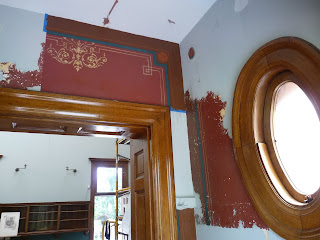 The colors of the plaster frieze just under the dome are being replicated according to the paint analysis done by Matthew Mosca of Washington D.C. in March.  It’s easy to see how brilliant General Wallace’s dome would’ve looked when all of the electric lights were on! 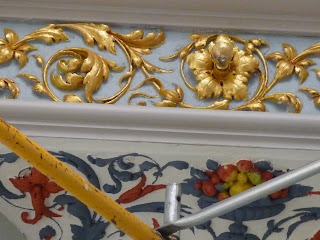 Outside, archaeologists from Weintraut & Associates in Zionsville are working with students from the University of Indianapolis to uncover General Wallace’s backyard reflecting pool.  Over weeks of painstaking work, they have found the brick perimeter topped by capstones lying just inches below the surface of the lawn. 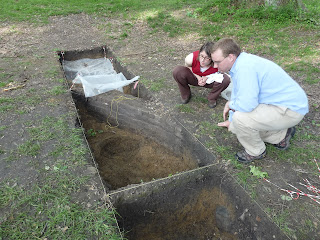 Keep an eye on this blog for further developments as we continue to work in restoring General Wallace’s “pleasure house for his soul” to its original splendor!