Our current intern from Wabash College, Kevin Stevens, has assisted operations at the Study. He gives tours to the public and researches our Classical Collection. He shares his experiences with us:

Thoughts of a Wabash intern

Among the many things Wabash seeks to impart upon its students is perfecting the ability to think critically, act responsibly, lead effectively, and live humanely. As an intern working with the General Lew Wallace Study and Museum, I have found these attributes important in my daily tasks. My main responsibility is doing research on the various artifacts the museum has in its collection. I gather historical context behind a particular object, discovering how and why it came into Lew Wallace’s possession. This task often requires a critical reading of primary sources that may offer insight on a given object. However, most of the time it takes some innovative thinking on my part to hypothesize how Lew Wallace might have come about in obtaining a stone from the Appian Way, cannon balls from the siege of Constantinople during 1453, a tile from the Mosque of Omar in Jerusalem, as well as scores of other artifacts.

Not only am I responsible for doing the historical research for these objects I also often give tours for incoming guests. With a small staff of four people, I have to multitask on the job. I 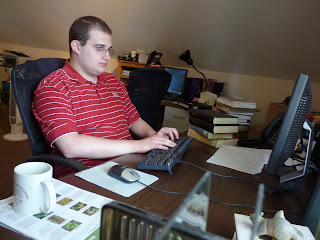 might be deep in a train of thought reading Lew Wallace’s autobiography when a guest arrives. Then I must set aside my research for the moment and start a tour, which is probably the part of the job I like the most. Lew Wallace has an impressive life story, and I get to tell that narrative. Most people either know that Lew Wallace was a Civil War General or that he wrote Ben-Hur. Yet, he was also a painter, an inventor, a violinist, the ambassador to the Ottoman Empire, and governor of the New Mexico Territory.

Probably one of the most overlooked story in Lew’s life is his role at the Battle of Monocacy. During the summer of 1864, Confederates under Jubal Early marched on Washington, D.C. Wallace noticed took his ragtag band of men to stop Early’s advance. In doing so, Wallace was able to delay Early’s attack on the nation’s capital, allowing Union general U.S. Grant to send reinforcements to defend Washington. This led to the claim that Wallace had “saved Washington” from being captured by the Confederates. The Battle of Monocacy illustrates Lew’s effective leadership as a commanding officer in a pivotal moment that could have altered the course of history.

I think that my time here at the General Wallace Study is part of the Wabash experience that furthers to enhance the values that the college seeks to impart upon its students. One can learn the abilities to think critically, act responsibly, lead effectively, and live humanely. However, they become ineffective if one does not use them in their day to day life. Interning at the Study has allowed me to see what I do best in and what I can improve on.