David Wallace played a prominent role in Hoosier politics in the 1820s and 1830s. He served as Indiana’s sixth governor from 1837 to 1840. During his term in office, he declared a statewide Thanksgiving Day holiday. In 1840, he was elected as a Whig to represent Indiana in Congress, serving from 1841 to 1843.

Professor Samuel F. B. Morse had perfected his telegraph and sent his first message over the wires in 1838. All Morse needed was a long-distance trial. Unfortunately, he lacked the funds for the trial. As a last resort, he applied to Congress in 1841 for an appropriation of $30,000. A bill was introduced and referred to a special committee of five, with David Wallace being one of the representatives on the House Ways and Means Committee.

As Morse stretched a wire from the House chamber to the Senate Chamber for a demonstration, a rushed vote was organized for the committee. There were only four members of the committee present in the House at that moment; David Wallace was watching the set-up in the Senate chamber. Although Representative Wallace did not understand the technology, he witnessed the sending of and reply to a message while in the Senate chamber.

Wallace hurried to the House chamber just in time to vote to approve the appropriation, moving the bill forward. The House and Senate ultimately passed the special appropriation bill. Without Wallace’s vote, that bill would have died.

Samuel Morse used the $30,000 appropriation to stretch a telegraph wire from the Old Supreme Court Chamber in the Capitol Building in Washington, D.C. to the Mount Clare Depot in Baltimore.

David Wallace ran for a second term in 1843, but Morse had not yet completed his long-distance public demonstration of the telegraph. Wallace’s Democratic opponent, William J. Brown, vigorously denounced the $30,000 that David Wallace had cost the country.

Wallace’s strong support of internal improvements in Indiana prior to the Panic of 1837 had already created financial struggles for the State of Indiana. As a result, audiences were receptive to Brown’s arguments. Wallace’s enthusiastic explanations of the telegraph fell on deaf ears. Hoosiers ignored David’s ambitious projections regarding the impact of the invention on commerce, individuals, and society. 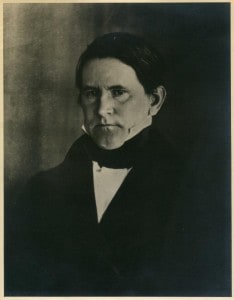 Wallace continued to play a role in Indiana politics, but he never again held elective office. In 1857, David gave the keynote address in Indianapolis’s celebration of the first trans-Atlantic cable between America and England. By this time, everyone recognized the telegraph as the wonder of the age. The public admired those associated with it. After a brief initial success, however, this first cable quit working. It took another nine years and many attempts to make the trans-Atlantic cable operational.

David died unexpectedly in September of 1859. While he lived to see many of the changes he envisioned wrought by the telegraph; he certainly never could have guessed how instant communication would change the world over the next 170 years. Imagine trying to explain these changes to those rural Hoosiers in 1843!

When the English Hotel & Opera House was built on Indianapolis’ Monument Circle in 1884, busts of famous Hoosiers, including David Wallace, ornamented the frieze. After the building’s demolition in 1948, the Dorothy Q Chapter of the Daughters of the American Revolution salvaged the Wallace limestone bust. The Dorothy Q Chapter donated the bust to the Study in 1963.