The large statue of Lew Wallace on the site of the Ben-Hur beech is not the only piece of free-standing sculpture on the grounds of the General Lew Wallace Study & Museum. Visitors who walk around the grounds find themselves face to face with an image of Lew’s father, David Wallace. David served as the 6th governor of the State of Indiana from 1837 through 1840.

This limestone likeness of David is one of the 31 images of Indiana governors and members of the English family that once adorned one of Indianapolis’ downtown landmarks, English’s Hotel and Opera House. In the 19th century, the English family was one of the most prestigious in Indiana. William Hayden English was born in Lexington, Indiana, in 1822 to a family with Kentucky roots. William attended Hanover College but did not graduate. Instead he followed his father’s lead and developed interests in politics and the law. His father, Elisha G. English, served in the Indiana House for almost 20 years. By the age of 19, William H. English was certified as both a teacher and a lawyer. By the age of 23 he earned his license to practice before the U.S. Supreme Court.

William English and his father belonged to the Democratic Party. They did not oppose slavery. By the early 1840s, William came under the influence of Jesse Bright. Bright, a powerful Hoosier politician, secured local appointments and positions for young English. Bright also owned slaves. In the mid-1840s, English lived in Washington, D.C. At that time, he worked as Clerk of the Second Auditor for the Treasury Department. There he met and married Emma Jackson, a Southern belle from Virginia.

Throughout the 1840s, English continued to live and work in Washington, D.C. He forged powerful alliances and secured the friendship of important political leaders. In addition, through diligence, hard work, and shrewdness, English proved his abilities. In 1851, he was elected to the Indiana House from Scott County. He served as Speaker of the House in 1852. During this time he gained more and more influence among the pro-slavery Democrats of Indiana and the nation. In the fall of 1852 he was elected to Congress.

As a member of the U.S. House of Representatives, English worked closely with the Buchanan administration in the late 1850s. In 1858, he helped secure passage of the pro-slavery Lecompton Constitution of Kansas. During this time, English also served as a Regent for the Smithsonian Institution from 1853 through 1861. When his term in Congress ended in 1861, English moved to Indianapolis. He began a business, banking, and legal career that led to a great family fortune. 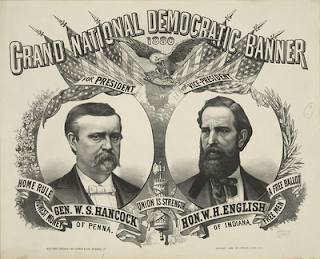 During the Civil War, English served as an advisor to Governor Morton even though the two were political opponents. English aided in raising troops for the Union cause. He ran as vice-president on the Democratic ticket that nominated General Winfield Scott Hancock for president in 1880. Hancock and English were only narrowly defeated in the election. English also authored several well-received books during his time in Indianapolis, including an exhaustive history of the State of Indiana. He died in his rooms in English’s Hotel in 1896 after an illness of about six weeks.

Perhaps the most visible example of the fortune W.H. English amassed was the English’s Hotel on Monument Circle that was built in three phases. The first phase of this grand Victorian edifice included an elaborate Opera House, completed in 1880, with an entrance facing Circle Park. The architect of the original building was J. Morgan McElfatrick of J.M. McElfatrick & Sons who were theater design specialists from New York City. In 1884, the building was extended east all the way to Meridian Street. In 1897, William H. English’s son, William E. English expanded the building to fill the entire northwest quadrant of Monument Circle. The architect for this project was Oscar D. Bohlen of D.A. Bohlen & Son. The building remained an Indianapolis landmark for another five decades until it was demolished in 1948-1949.

Builders carved the David Wallace bust for the 1897 expansion of the English’s Hotel and Opera House. The busts of the governors and English family members populated a decorative band between the second and third floors of the stately hotel. Research by Ratio Architects of Indianapolis for a Historic Structures Report they have completed on the Lew Wallace Study & Museum indicates that the bust of David Wallace was the second one north of Market Street on the Monument Circle façade.

When the hotel was demolished, many of the busts were salvaged and sold to various collectors and groups. Crawfordsville’s Dorothy Q Chapter of the DAR acquired the bust of David Wallace. A brick and stone structure was built to hold the David Wallace bust. While Donnis Widener served as Chapter Regent, they dedicated the sculpture in a ceremony on the Study grounds.

This sculpture, located near the parking lot, provides visual interest for the grounds. In addition, it commemorates David Wallace’s contributions.