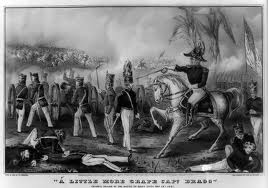 “A victory so great, so unprecedentedly glorious, could not have been purchased without loss on our side. Among the 700 heroes who were slain and wounded on that bloody day we who knew him from infancy have to mourn the death of Captain Kinder. Poor Truss. The glory which shall forever shine upon the field which was thy deathbed, which shall reflect luster upon thy name and fate, is but sorry consolation for the loss this death inflicts upon his country and friends. Peace, though, to his name. When we reach Saltillo we will mark his resting place and save it from obliteration and disrespect.”

Trustin Kinder, Truss to his friends, was born in 1822 and grew up in Indianapolis. He graduated from Asbury College (later DePauw University) in 1845. He returned to Indianapolis, but soon moved to Paoli, the Orange County county seat, where he practiced law. In letters back home to friends in Indianapolis, he described Paoli as “. . .a very pretty little town of about six hundred inhabitants who are very kind and clever people. The scenery around the town is delightful. Indeed, it is quite romantic and I am inclined to think that if I was given to writing poetry that it would be an admirable location. But my genius not inclining that way, I just stand and look out and think upon the subject.”

When the Mexican-American War broke out, he volunteered for service. Kinder was voted First Lieutenant of Company B, 2nd Indiana Regiment of Volunteers. He was a talented young lawyer and a gifted speaker. Kinder delivered a speech in support of the war of considerable length and great strength declaring that he “. . . would leave his bones to bleach on the sunny plains of Mexico rather than see his country’s flag dishonored and trailed in the dust.”

By the fall of 1846, Kinder wrote his letters from distant locations like Camp Belknap, Texas, and Monterey, Mexico. On January 1, 1847, he wrote his parents to wish them a happy new year from a camp near Saltillo, Mexico. He detailed the march to the new encampment and the countryside. Also he described some of the skirmishes that had raised excitement in the area. Kinder also discussed activities of Lt. Governor Paris Dunning, who served in Mexico. Dunning ngaged in personal business that brought him financial gain, such as selling liquor to soldiers at exorbitant prices. Hoosier newspapers reported Kinder’s charges. The charges created a stir, but Kinder and other officers stood by the comments.

By early February of 1847, Kinder’s letters reflected increased fighting between the Mexicans and Americans. He also noted that members of Congress who didn’t support the war effort were doing a favor to the Mexicans. He wrote, “In fifteen years they will deny their opposition to this war. They had better back out in time to save their credit, if they have any to save.” Finally, he wrote about rumors. One rumor suggested reinforcements would be arriving. Another said his regiment might head home in early April.

The Battle of Buena Vista

News of the Battle at Buena Vista did not reach Indianapolis for almost a month after the fighting on February 22 & 23. Lew Wallace wrote his letter, quoted above, just two weeks after the battle. However, with slow mail delivery, it did not reach home for several more weeks. In the battle, General Zachary Taylor with 4,600 men faced Mexican General Santa Anna, who commanded over 15,000 men. During the fighting, the 2nd Indiana was given orders to retreat. Some men left the field of battle in confusion. This led Taylor and his son-in-law, Jefferson Davis, to later accuse them of cowardice.

Trustin Kinder was wounded in battle and placed in an ambulance wagon. As the wagon left the field, it overturned and fell into a shallow ravine. Before it could be righted, Mexican lancers attacked the wagon, killing and robbing Kinder. Although Taylor was considered victorious at Buena Vista, it was a hard-fought, bloody win.

On April 5, the Indiana State Sentinel published a lengthy tribute to Trustin Kinder, saying in part: “. . . It is not for us to tell the merits of the departed one—for many know him, and many a weeping eye and heavy heart responded to the news that the open and noble-souled Kinder was gone.”

Kinder was buried in Mexico. However, in an unusual effort, his elderly father travelled to Mexico and in June made arrangements to ship Kinder’s body back to Indiana. They announced a procession would form at the Palmer House (hotel). It would proceed to the city limits to meet the remains and escort them to the Orange County Courthouse. After a short time in Paoli, the body was removed to Indianapolis.

Until the death of Oliver P. Morton in 1877, the funeral was the largest seen in Indianapolis. It included a lengthy procession from the Kinder home to the State House Square. There the body lay in state in the Capitol rotunda on July 12, 1847. A funeral train under military escort then took the body to the City Cemetery in Indianapolis. Kinder was considered the first war hero from Indianapolis and was the only casualty from the capital city to be returned from Mexico. His mother moved his body Crown Hill Cemetery in the fall of 1864, shortly after Crown Hill’s establishment. This made Trustin Kinder the first man to die in service of his country to be interred in Crown Hill.

Before the regiment left Indianapolis, Colonel Wallace had his men march to the Indiana State House. There, he had them kneel and swear an oath to avenge their comrades, whom Wallace believed had been unjustly accused of cowardice at the Battle of Buena Vista by none other than Jefferson Davis. Wallace had his regiment take as its battle cry: “Remember Buena Vista!” This stirring scene was captured in a full-page illustration by the influential magazine Harper’s Weekly and circulated nationwide. Although Kinder was not singled out by Wallace at the time, he certainly would have reflected on his friend killed fourteen years earlier who had been lauded in the press as one whose “. . . memory will forever live; for he was of the number who nurtured the rose around which our affections twine—and who by his frank and noble nature secured the love of all with whom he daily walked.”

One thought on “Wallace, Trustin Kinder, & the Battle of Buena Vista”