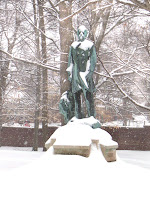 The winter of 2010 has been a chaotic mix of snow, sleet, wind and extreme cold. Mother Nature has thrown a wide range of different weather patterns to central Indiana. October was one of the wettest months in history and the first 15 days of 2010 never saw the temperatures rise above freezing.
Temperatures hovering just above zero in January and over 7 inches of snow in one storm, has the grounds of the Museum looking like a winter wonderland. Concerns about pipes freezing had the faucets kept to a slow trickle for days on end.
Even though the winter has seemed long, gloomy and never ending, Spring is on the doorstep (wishful thinking?) The blanket of snow on the ground for weeks, has now melted and surprise! Daffodils are emerging! In the past, daffodils have emerged towards the end of February. Emerging now puts them a full month ahead of schedule. I suspect that they will ‘hibernate’ until the proper time to bloom. Time will tell. 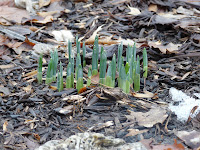 Siberian squill (scilla) has also sprouted. Scilla, a bright royal blue, usually shows some color the first of February. Spring cannot be far off, can it?