In our tours of the Study, we often mention the mechanism that allowed the chariots to race on stage with eight horses galloping at full speed. This was an amazing feat for a stage production in the first decade of the 20th century. In addition, other aspects of the Broadway Ben-Hur electrified audiences. A number of other tricks and mechanical devices wowed the crowd.

Scientific American reported in their August 25, 1900, issue that the wait time between scenes in Ben-Hur generally varied from between five and thirty seconds. However, chariot race arrangements sometimes took as long as eight minutes. In other complicated productions of that time, the change of each scene routinely took between five and fifteen minutes! This interrupted the story long enough for many in the audience to lose interest. Yet the fast pace of Ben-Hur was virtually uninterrupted.

The audience received a bit of Broadway magic with the sea battle and wreck of Arrius’ ship. The scene opened with Arrius on a dais at center stage and the galley slaves rowing below him. At the climax of the battle, the theater was suddenly plunged into total darkness. The audience heard panicked screams. Crashing and grinding of timbers came courtesy of a “crash” machine.

Within seconds, the lights came up and the audience saw Ben-Hur and Arrius “adrift” at sea. The actors sat on a raft several feet off the floor in front of a dramatic shipwreck scene, lighted with special electrical effects. The hinged raft allowed a rocking motion in two directions.

In order to accomplish this change of scene on stage in front of the audience without dropping the curtain, the actors and stage hands used split-second timing in the pitch black dark of the theater. The “crash” machine kept crashing to cover the noise of movement on stage. The second the lights went out, the galley slaves with their oars fell flat to the floor. Stage hands immediately pulled their benches into the wings. Ben-Hur leapt to the dais with Arrius. Then pins were removed to allow the dais to be converted into a rocking bit of flotsam.

One set of stage hands raised the backdrop scene of the galley ship to reveal the shipwreck scene. At the same time, another group brought a large canvas from the back of the stage forward to the footlights. They pulled the canvas over the galley slaves laying on the floor. The galley slaves, covered by this tarp, used their oars, arms, and legs to simulate the rolling waves of the ocean.

The cast and crew accomplished all of this in the dark, among the props and scenery, without stepping on anyone, in about seven seconds!

The chariot race also left little to the imagination. Cue the chariots! Horses had run on stage treadmills before Ben-Hur, but never with the sophistication of this production.

The treadmill allowed the eight horses to race at full gallop. This effect was heightened by belts turned at 90 degrees to the floor near the horses’ hooves. As the horses ran—faster or slower—these belts made the ground appear to move at pace with the horses.

To further the effect, blowers under the floor forced powder up through the treadmill to resemble dust.

One of the most evocative special effects was the presentation of Jesus. Lew Wallace would not permit an actor to portray Jesus—a central figure to the storyline. After much discussion and debate, they decided whenever the script called for Jesus to move the story forward, a strange and ethereal light would appear on stage and a voice that permeated the theater would be used.

This unique solution left much to the imagination of the audience. In turn, this made each performance a personal experience. It heightened the spiritual impact of the play and eliminated any controversy about putting Christ on stage. It also eliminated the need to pay an actor to play Jesus.

The Special Effects of Broadway 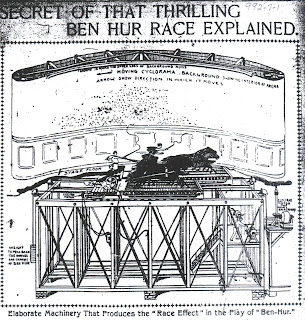 Stage hands accomplished Messala’s dramatic chariot wreck using a trick chariot. Ben-Hur’s chariot wheels were actually in contact with the treadmill. However, Messala’s chariot rested on a yoke with springs that kept the wheels slightly above the treadmill. A motor spun his wheels. At the critical moment, another small electric motor blew the wheels off of Messala’s chariot. Then the basket and rider dropped onto the springing yoke. The treadmill and adjacent flooring carrying Messala jerked back 15 feet, allowing Ben-Hur to win. According to William S. Hart, who played Messala, this complicated mechanism worked all but one of the 400 times his horses raced.

2 thoughts on “Ben-Hur on Broadway”