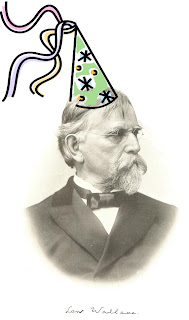 On April 10, 1827, Lewis Wallace was born in Brookville, Indiana, and thereafter spent his life bringing honor to his home state: through his epic achievements in literature, including his masterwork Ben-Hur; through his capacity as senator, ambassador, artist, musician and inventor, and especially through his gallantry as a young man in the Mexican and Civil Wars, a role that is currently being featured in the Museum’s new exhibit, “Embattled: General Wallace’s Leadership in the Civil War.”

“We’ve got a lot of fun activities planned,” said Deb King, Museum Grounds Manager. “Weather permitting, we’ll have lawn croquet, walking on stilts, and scavenger hunts with prizes. Indoors, visitors can play a code-breaking game and even draw their own Civil War battle maps and direct their toy solider troops into battle.” Visitors can also help plant some of the gardens on the Museum grounds, including the Lew Wallace Children’s Garden. Activities are designed for visitors of all ages, and admission to the Museum will be free.
For further information about this special event, contact Grounds Manager Deb King at 765-362-5769 or email [email protected]