Susan Elston Wallace was one of the nine children born to Isaac & Maria Elston. One of her sisters was Helen Elston Blair, who built the Gothic Revival home at the corner of Wallace and Wabash in Crawfordsville. Helen had a niece named Rose Blair Marsh. Rose came to know the Elston family in Crawfordsville, including Lew and Susan Wallace. She gave the following description of the Wallace marriage: 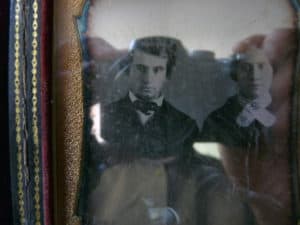 “Hers [Susan’s] was a match for love, to a poor man, and for years she lived in a most humble way, doing her own work. And afterwards, when fame and wealth were hers, she used to look back on those early years as the happiest of her life… She cared little for society, much preferring her beloved books.”

Susan once told Rose to make her friends among books, for if they bored her she could cast them aside without hurt feelings and take them up again at will, and that they were the truest friends to own. Rose described Susan as: “. . . a woman of quiet dignity and reserve and display meant nothing to her; she knew the worthwhile things that really count.”

Lew’s writing on their marriage

Lew also recognized Susan’s attributes and in his autobiography there is a wonderful tribute to his wife, a part of which reads:

“Her gentle soul has controlled me and bent me to her wishes, but unselfishly, and always for my good, and always so deftly I was as one blind to the domination. My temper has never been so hot she could not lay it. She has decided me in doubt, defended me against interruptions, saved me my time at the sacrifice of her own, cheered me when down at heart, lured me back to my tasks when the tempter would have whisked me away, held my hand in defeat and rejoiced with me in my triumphs…

Her faith in me began with the beginning, when I was unknown and uncertain of myself, and the world all too ready to laugh at my attempts. Hers is a high nature, a composite of genius, common-sense, and all the best womanly qualities. The marvel, her memory, has always been at my service. Most fortunately for me the books she loves are the best and she knows them by heart. With her in call, I have no use for dictionaries of quotation… What of success has come to me, all that I am, in fact, is owing to her.”

Throughout their long marriage of fifty-three years, Lew and Susan remained devoted to each other. Lew Wallace died at home on February 15, 1905. After the general’s death, Susan Wallace wrote to a relative:

“The love of my life is gone. I am now 76 years old and my heart is a tired hour glass. It seems hardly worthwhile to watch the slow dropping of the sands… the past is ever present with me, and though I look through all the faces in the world, I shall never see another like that of my first, last and only love.”

For the last several years of his life, Lew Wallace had been working on his autobiography. In a fitting tribute to the man she had partnered with for so many years, Susan took up where Lew left off. With help from her friend, Mary Hannah Krout, she finished his life story and saw that the two volume work was published. This enterprise was likely the spark that sustained Susan. Once the work was completed, Susan’s energy faded. In October 1907, she passed away in the home they had shared.