Where is the grave of Old John? Local lore has it that Lew Wallace buried his favorite horse, named John, somewhere on the grounds. Last fall, surveyer Jim Swift brought out ground-penetrating radar (GPR) to investigate the southwestern corner of the grounds, where many people remember there being a marker to John decades ago. The GPR found an anomaly under the surface, meaning that there is an area that is not the same as the soil around it. Could it be a horse’s grave? An outbuilding for the house on the other side of the brick wall? Just some funny dirt? 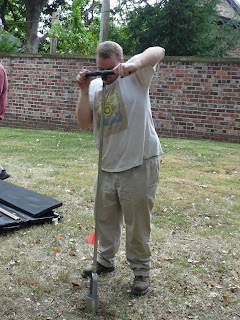 Dr. Chris Moore of University of Indianapolis brought out a bucket auger to drill into the ground and extract layers of soil to see what this anomaly is made of. 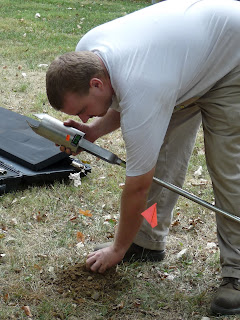 Moore sifted through the dirt in each layer, noting its composition and whether or not it contained any artifacts. A student recorded his observations so we have a record of the layers of soil. 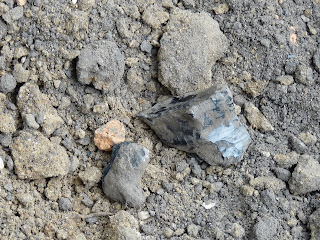 Pay dirt! 85 cm below the surface, we hit a cultural layer containing tile (orange-colored piece), charcoal and coal (larger black pieces). Such materials were commonly used as backfill years ago when someone dug up an area and then filled it back in. The question is, why was someone digging here? Could it be John’s grave?

Who’s up for another History Beneath Us program focusing on this area?