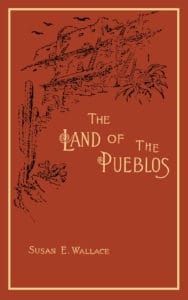 President Rutherford B. Hayes appointed Lew Wallace as Governor of New Mexico Territory in September 1878. He arrived in Santa Fe on September 30. Susan and their 25-year-old son Henry arrived in New Mexico in early February 1879.

Susan later wrote about her trip to New Mexico in The Land of the Pueblos:

“Oh! the horror of the chamber of torture known to the hapless victims as the sleeping-car. The gay conductor, in gorgeous uniform, told us, in an easy, off-hand manner, a man had been found dead in one of the top berths some weeks before. I only wondered any who ventured there came out alive. “Each in his narrow cell forever laid” went through my mind as I lay down to wakefulness and unrest in blankets filled with vermin and disease.”

Henry invested in some mining interests with his father but did not stay in New Mexico for long. He was home by May 1879 when he received this letter from his mother:

“This way of living does not suit me; some men find an unaccountable fascination in the danger and outlawry of the frontier far beyond my understanding. Sweet home was never sweeter to my thought than now in this wilderness without the manna…. We should have another war with Old Mexico to make her take back New Mexico.”

Land of the Pueblos

Susan traveled throughout the territory and wrote many articles about her travels and the people living she encountered. These articles were published in the New York Tribune, the New York Independent, and the Atlantic. These articles were later turned into her book The Land of the Pueblos. She visited the Los Cerillos turquoise mine, the Painted Desert, Taos, and Inscription Rock. She also saw El Moro, Canyon de Chelly, Casa Grande, and Acoma.

Susan wrote about the landscape they traveled on their way to Los Cerillos: “Here all is on the same magnificent scale. The plains are broad as the summits are high; the refined atmosphere so intensely clear the light is like a reflection from snow. No such extensive views are in Europe or any country where the air holds moisture, and sometimes the landscapes seem absolutely limitless.”

Almost by accident, Susan also discovered priceless records from the time of the Spanish conquest. She was exploring an abandoned building near the Palace of the Governors. Here is the story in her own words:

“Ever a lover of lonesome places, I had often wistfully eyed these mysterious apartments; and one day, being sadly in want of entertainment, hunted up the keys and sallied across the back yard, determined to explore the secret places. The first door I tried to open was made of heavy double plank, studded with broad-headed nails. I fitted a key into the rough, old-fashioned lock, and, pushing with all my strength, it slowly swung on rusty hinges, into a room, perhaps seventeen by twenty feet in size, barely high enough for a man to stand upright in. As I stepped on the loose pine boards of the floor, a swarm of mice scampered to their burrows in the walls, and the deathlike smell of mildew and decay smote the afflicted sense. Well for the chronicles is it there are no rats in the territory. Involuntarily I paused at the entrance, to let the ghosts fly out; and several minutes passed before my eyes, accustomed to the darkness of this treasure-house, could see the shame of its neglect.

“I had entered the historic room of New Mexico! Tumbled into barrels and boxes, tossed on the floor in moist piles, lay the written records of events stretching over a period of more than three hundred years, the archives of a Province known as Nueva Espagña, large as France. In an atmosphere less dry than this they would have rotted ages ago. Nothing but the extreme purity of the air saved them from destruction.”

After this discovery, Lew and Susan protected the history of New Mexico by hiring Samuel Ellison to salvage and restore these archives. Ellison said there were “chickens roosting on them and the drippings from the house falling on them.”

Susan returned to Crawfordsville in October 1879. On May 30, 1881, Lew boarded a rail car on the Atchison, Topeka, and the Santa Fe to leave New Mexico Territory.