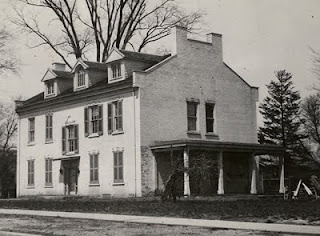 Lew Wallace was a man who loved to satisfy his curiosity by research. He also had great curiosity as a boy, and satisfied his need for knowledge in brave and exciting ways. In his autobiography, Lew comments on the fine and wondrous home of Major Elston.

“His [Elston’s] dwelling-house, in the midst of a primeval woods, was the best in the county, and it was furnished to correspond, and the fame thereof went abroad.”

People far and wide commented on the Elstons’ home and furnishings. At one point Lew heard that the Elstons had a sofa in the hall. Given his modest background, Lew had never heard of a sofa. He had no idea what it was—but he intended to find out.

Lew realized that he was not a part of the Elstons’ social circle and would not be invited into their home. As many a young boy in such a dilemma might do, Lew simply invited himself into the Elston home unannounced—being careful to assure that no one else was home either.

He faced a similar situation when he heard that the Elstons had recently purchased a piano. He had no idea what a piano was but he was able to find out from friends that it was a musical machine. Again, he crept into the Elston home uninvited and saw the mysterious machine without being discovered. This led the curious boy to his next question—just how did the machine make its music?? More research was necessary.

He waited many days until the Elstons hosted a party one evening in the double parlors. After dark, Lew crept “Indian-like” through the Elston grove and up to the windows glittering with candlelight. Lew watched and waited in the dark. In a little while a young lady went to the machine, opened it, and miracle of miracles, she began playing “One little, two little, three little Indians. . .” His research had paid off.

Throughout his life, Lew remained a person with an extraordinary curiosity about the world around him. He was also a man of action who didn’t always wait for an invitation before proceeding. In reading his autobiography, it’s easy to see how the curious boy became the military leader we remember and the creator of characters from worlds beyond Crawfordsville.