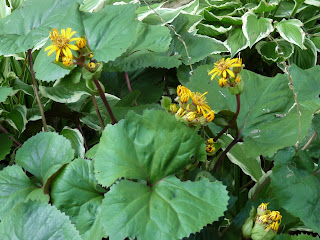 We look to the groundhog to tell us if spring will come soon, but can plants tell us if there will be an early fall? Grounds Manager Deb King has made some keen observations about the plant life on the grounds, and all signs seem to point to cold weather coming a few weeks early this year. The ligularia, one of the most asked-about plants on the grounds, has sprouted its black-eyed susan-type bloom – and in some cases gone to seed already – about three weeks ahead of their usual time in mid to late August. The pawpaw trees are also loaded down with their “Indiana banana” fruit that will likely drop by the end of August. Deb commented that, “They did that last year, dropped their fruit before the Taste, and we had an early winter.” The final clue is the walnut trees, which have started bombing the lawn in front of the Carriage House with walnuts weeks ahead of the normal schedule. Perhaps an early start to fall will bring relief from the heat and humidity we’ve been dealing with. Or, perhaps all the rain has prompted an unusual reaction in some stressed-out plants. We’ll find out in a few months!