During the Civil War, General John M. Thayer provided a description of Lew Wallace and his favorite horse, Old John.

I shall never forget the splendid picture the man and scene presented. The sun was barely rising of a cold, frosty morning. General Wallace was a princely figure, particularly in the saddle, and he rode a handsome blooded roan stallion, a single-stepper that was the pride of the division. As he came riding up, his military accoutrements flashing the red light of the rising sun, and the charger moving as though to the sound of music, he presented a sight that is not seen more than once in a lifetime.

Old John and the Armantrouts

Although Old John was a legendary horse and fondly remembered, there is much that we don’t know about him. We believe that Wallace purchased John from the Armantrout Farm. The Armantrouts settled about five miles south of Crawfordsville. The patriarch of the family, Frederick, served in the Revolutionary War. He settled here with his son, Joseph in 1827. Joseph became one of the leading and most progressive farmers in the county. He pursued a number of ventures, including the breeding of horses. It’s possible that Lew did acquire John from the Armantrouts. However, we don’t know when Wallace bought the horse or how old the horse was. 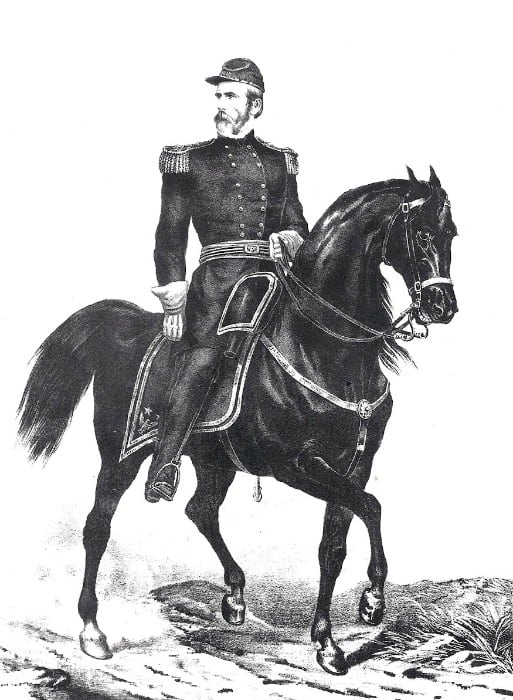 During the Civil War, Lew relied on John and took great pains to provide for his horse. In his autobiography there are numerous references to John including this:

I loved this horse passionately. For five years he was my faithful, intelligent servant and friend; and in all that time there was never an hour in which I would not have gone hungry and thirsty if, by so doing, it had been possible to have saved him. He was in my mind when, long afterwards, in The Wooing of Malkatoon, I wrote these lines:

But Othman waved them off: “Bring me my horse.
But yesterday from noon to set of sun
He kept the shadow of the flying hawk
A plaything ‘neath his music-making feet.
I will not comrade else.”
Tent born and bred,
The steed was brought, its hoofs like agate bowls,
Its breast a vast and rounded hemisphere,
With lungs to gulf a north wind at a draught.
Under its forelock, copious and soft
As tresses of a woman loosely combed,
He set a kiss, and in its nostrils breathed
An exhalation, saying, to be heard
By all around, “Antar, now art thou brute
No longer. I have given thee a soul,
Even my own.”
And as he said, it was,
And not miraculously, as the fool
Declares; for midst the other harmonies
By Allah wrought, the hero and his horse
Have always been as one.

Prior to the Battle of Fort Henry in February of 1862, Wallace wrote:

In a mood of royal expectancy, I called the servant who took care of John, my horse, the noblest of his kind. “Groom him now, and feed him well. He will have heavy work to do for me to-morrow.” And I sat till night fell watching that what I ordered was done.

The big Heiman tent proved a welcome refuge, and, with my staff, I heaped blessings on the captain of the steamboat. While we were sounding the depths of his basket, I remembered, with a wrench of spirit, that my horse had gone since early morning without a drop of water or a bite of food. I reproached myself bitterly. It had been so easy to have dropped a bag of oats in one of the wagons! A teamster came to my help with a capful of shelled corn. Then, in place of water, the noble brute was given a long tether that he might make the most of the snow. Hard, truly!

And from pitying the horse my sympathy went out to the men. . .

The morning of the 15th crawled up the eastern sky as a turtle in its first appearance after hibernation crawls up a steep bank. Just before it shook out its first faint signs of life, I went out to look after my horse John. Poor fellow! The blanket I had loaned him helped comfort him; but he had happed up all the snow in the circle of his tether, and that, not to speak of the appeal in his eyes, told me how he suffered for water. I had about made up my mind to take chances and have an orderly lead him back to the first running stream, when an unusual sound off to the right front of position attracted me. I listened. The sound broke at a jump into what was easily recognizable as a burst of musketry. . .

John was brought me, and I rode to Cruft and Thayer. Both were directed to have their men breakfast and stand by their arms. Cruft was told to call in his extra guard details.
At my tent again, I borrowed a capful of corn for John, and while he was eating, the ever-handy basket surrendered its contents, and we were content to take our coffee out of the bottles cold.

Time and again, Wallace remembered sharing the burdens of war with John in the spring of 1862.

. . . My horse objected to the dead men still lying in the road; but getting past them, the hill dipped down into a hollow of width and depth. At the left there was field; all else appeared thinly covered with scattered trees. The pickets in the hollow were maintaining a lively fusillade, so I turned into the field. I could then see the road ran off diagonally to the right. A bluff rose in front of me partially denuded, and on top of it Confederate soldiers were visible walking about and blanketed. Off to the left the bluff flattened as it went. In the direction I also saw a flag not the stars and stripes, and guessed that the fort lay in studied contraction under it. I saw, too, a little branch winding through the hollow, and thought of my poor horse, then two days without water. The men keeping the thither height caught sight of my party, and interrupted me in the study of their position. Their bullets fell all around us. One cut a lock of the mane of a horse of one of my orderlies. But I had what we came for, and got away, nobody hurt.

Upon rejoining them at the battery, the old regiments (Eighth and Eleventh) cheered me; whereat the fort opened, firing harmlessly at the sound. The Eleventh, from their stacked arms, crowded around John—“Old Balley,” they called him—and filling a capful of crumbled crackers, some of them fed him what he would eat. They would have given him drink from their canteens had there been a vessel at hand to hold the water.

In these moves my horse had answered me readily but with his head down—a thing that had not happened before. The other horses of the company were worse off. There was need for me up on the height, but we stopped by the little brook and broke through the ice. While the poor brutes were drinking greedily, Colonel Webster came to me.

The Battle of Shiloh

Finally, in April as the Battle of Shiloh loomed, Wallace wrote:

My last preparatory order brought John to the Landing. I went ashore to see him. The good horse might have to suffer again; but, fortunately for him as well as myself, the season of snow and boreal winds had passed.

John, the good horse, had shared the night with me close by my sheltering tree. He was wet through and through, and like myself, more than willing to be in motion.

Toward the end of the Civil War, there is a story of a horse race between General Wallace on Old John and General Ulysses S. Grant on his prized saddle horse Cincinnati. Supposedly Lew was holding John back, and Grant realized it. He told Lew to let him run. Old John won the race, and Grant endeavored to buy him on the spot. Without even considering the offer from his superior, Lew replied, “not for love nor money.”

Research has not yet indicated just when John came into Lew’s life, how old he was when Wallace purchased him, and just when John died. We don’t even know when references to the horse went from “John” to “Old John.” Anecdotal stories indicate that John lived to be a very old horse and died around the turn of the twentieth century. This would have made John, very old indeed for a horse as he would have been in the neighborhood of forty years old.

Again, according to legend, when John died, Lew had him buried on the grounds of the Study up near the southwest corner of the property. Visitors to the grounds as far back as the late 1920s have related that they were told by Mr. Elliott, the caretaker, that John was buried there.

One of the final references to John was recorded on January 1, 1900 by Miss Ella Kostanzer when she interviewed Wallace. Ella wrote:

I must relate an incident that was interestingly funny to me and which I think you will enjoy. In a high enclosure behind the house was “Old John” the General’s war horse, which carried him all through the Civil War. A creature of great size, power and spirit, he greatly annoyed his master by often breaking through the high fence and leaping over ordinary fences like a deer, getting into the streets and terrorizing the community. As no one but the General or his groom could get anywhere near him, it was very provoking to be compelled to throw pen and paper aside for the difficult task of capturing the old fellow. His conduct was most exasperating to the General.

Through legends and stories, John still continues to be a part of the history of the Study. It’s nice to think that when guests enter the Carriage House for a tour, the gift shop to the left was the stall that once housed the General’s pride and joy, the handsome blooded roan stallion named John.