This year in our exhibit we are talking about all of the places Lew and Susan traveled during their lives. Lew did much of his early travel during the Mexican War and the Civil War. Today I want to talk about his time in Maryland during the Civil War. 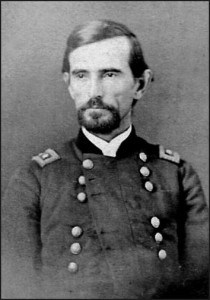 Lew Wallace was without a field command in 1864. He was a major general, but he had left his last command in 1862, after he felt General Halleck’s animosity had grown too strong. Lew was camped in the Grand Kankakee Marsh  when orders arrived for him to assume command of the Middle Department.

In 1864 the state of Maryland was considering the matter emancipation. The Emancipation Proclamation freed slaves only in states that had seceded. Maryland was a border state that had not seceded; therefore, the proclamation did not apply. Instead, Maryland held a referendum in 1864.

Lincoln needed a man he could trust. Perhaps his friend, U.S. Senator from Indiana Henry S. Lane, suggested Lew Wallace. Lew had certainly been campaigning hard for a new field command. It seems likely his brother-in-law Lane would help out.

Whatever the reason, Lincoln chose Lew Wallace to deal with the Maryland referendum. Lew and Lincoln met while they were both lawyers, but the stakes were much higher now.

Lew wrote about his meeting with Lincoln:

Time and care had told upon him. His face was thinner and more worn, and I thought the stoop he had brought with him from his home in Illinois more decided. Nevertheless, the smile with which he spoke and the certain indefinable cheeriness in his clear voice were winsome even more than ever, and they stayed with me. They are with me now.

Lincoln spoke briefly with Lew, but left it to Secretary of War Edwin Stanton to explain the extend of Maryland’s situation.

“It is this,” [Stanton] said, gravely. “The last Maryland legislature passed an act for an election looking to the abolition of slavery in the state by constitutional amendment. The President has set his heart on the abolition in that way; and mark, he don’t want it to be said by anybody that the bayonet had anything to do with the election. He is a candidate for a second nomination. You understand?”

“I think so, sir. Anyhow, I want him renominated and elected.”

“I never heard of the business before.”

“Well, then, it is kindness saying it will be your first trial.”

April 6, 1864 was the date for the election, and Lew assumed command of the Middle Department on March 22, 1864. Lew embarked on a crash-course in Maryland politics, feeling out local sentiment on slavery and the war. Finally, he called on A.W. Bradford, the civil governor of Maryland. Lew writes:

I asked him, when the opportunity came round, for a few words in private, and, being led into an adjoining room, referred to the pending election, and gave him some of the petitions that had reached me praying for troops at the polls. After he had examined them, I put the interrogatory: “If, fast as such petitions come to me, I send them properly indorsed to you, governor, what will you do with them?”

Then I waited, doing my best to hide the intensity of interest I felt in his answer.

He took a moment, given, I think, to a form of reply.

“Mail all petitions of the kind to me,” he said, with singular directness, “and I will return them to you with my official request that you send troops as prayed. The matter is really within my province, and I thank you for recognizing the fact.” He added, presently, “I only want to make sure that the papers you forward to me are in good faith.”

By establishing this process, Lew and Bradford assured that the state of Maryland bore responsibility for the military presence assuring fair voting at the polls. The state of Maryland, and not the federal United States government. With states’ right to self-govern one of the key factors in the Civil War, this was an important distinction.

Maryland did vote to free the slaves. Lincoln sent for Lew to congratulate him. Lew wrote that Lincoln said, “I sent for you…to say that I watched the boiling of the kettle over in Maryland, and I think you managed it beautifully.”

Secretary Stanton also praised Lew. “It was well done. They can’t say now that we used the bayonet in the election. If the governor did, that’s a different thing. Nobody will deny his right to use it.”

Emancipation took effect in Maryland on November 1, 1864. That it succeeded according to Lincoln’s wishes is thanks, in large part, to Lew Wallace.