In the late 19th century, Crawfordsville became known as the Athens of Indiana because of the impressive number of successful authors who claimed Crawfordsville home. At the same time, it was also known as the archery capital of the United States. Maurice Thompson was a celebrated leader in both of these seemingly unrelated worlds. 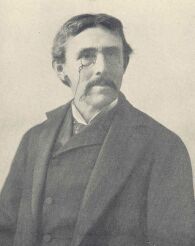 Thompson was born in Indiana but grew up in Georgia. Like Lew Wallace, Maurice learned best in the outdoors; not in the classroom. Like Lew, Maurice served in the Civil War; although in the Confederate army. Also like Lew, Maurice tried many careers with varying degrees of success. He worked as a railroad man, civil engineer, surveyor, naturalist, geologist, soldier, lawyer, politician, novelist, poet, and sportsman. And finally, like Lew, Maurice had strong creative talents. With all of his careers and interests, Maurice Thompson is best remembered as a novelist and sportsman.

For reasons unknown, Maurice Thompson moved to Crawfordsville in 1868, followed by his brother, Will. Maurice soon met and married Alice Lee of Crawfordsville. His brother married Alice’s sister. Beginning in the 1870s, a number of Maurice’s essays, articles, and publications began receiving broad public acclaim. He is most widely remembered for two works, Alice of Old Vincennes, published in 1900, shortly before his death in 1901 and The Witchery of Archery, published in 1878.

Archery Capital of the US

An avid outdoorsman Thompson, together with his brother Will, developed a passion for bow hunting and archery. In the 1870s and 1880s, four Crawfordsville men made up the top archery team in the country—Maurice and Will Thompson, Henry Talbot, and Paul Hughes. The Thompson brothers were also individual champions. The men bow hunted game in the countryside, had contests with archers from surrounding states, and even challenged Lew Wallace.

One of the more memorable events in Crawfordsville’s sporting history happened when Thompson and two of his Confederate friends, who were visiting Crawfordsville, challenged Lew Wallace and two of his Union friends to a competition. Thompson’s team used bows while Wallace and his team used rifles. In this North versus South, bows versus rifles shooting match—the Southern bows won! By all accounts the six marksmen enjoyed the event as “a day’s excellent sport.”

With the Thompson brothers’ national reputations and Maurice’s writing on the sport, Crawfordsville enjoyed the undisputed title as archery capital of the country. The national archery association formed in Crawfordsville. Its first meeting occurred here in 1879. As the national craze for bow hunting caught on, two local women, Mrs. Alice Klein and Mrs. William Lee, gained fame, winning state and regional contests.

With the significant parallels in their lives, Wallace and Thompson shared a long and strong friendship. They were even neighbors, as the impressive Thompson home, Sherwood Place, was within sight of the Wallace Home. Called “The Father of Archery,” Thompson popularized the sport in the late 19th century. In 1939, the National Archery Association named their highest honor for outstanding members of the archery community the Maurice Thompson Award.