So what did we find this weekend during this spring’s History Beneath Us excavation? 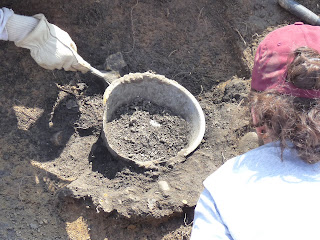 Probably the most dramatic find was the metal vessel – bowl, pot, chamber pot, pitcher, whatever. The crew removed it from the ground and have taken it back to the lab at the University of Indianapolis for analysis and some conservation to stop the metal corrosion. 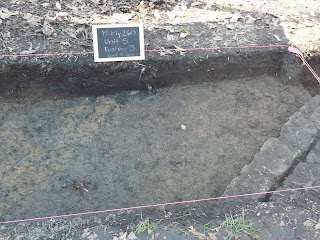 We located the builders’ trench, which is the ditch the builders dug to stand in while they laid the brick wall of the reflecting pool. When they were finished, they filled it with a dark soil (the the right in the photograph above), which contrasts with the lighter brown clay soil mottled with worm holes (the the left). This trench, Feature 3, didn’t get excavated this time, but it will be the focus of future projects. Because it dates to the building of the reflecting pool, the fill and any artifacts in it date to Lew Wallace’s time. 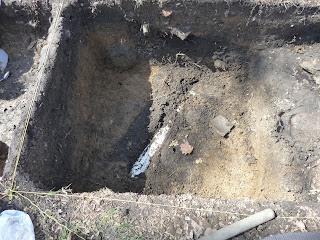 We also found a pipe! In Unit 3, we knew workers in previous decades had dug through to install a drainage ditch and pipe. We thought the pipe was in the northern half of the unit (the right side of the photo above), but clearly we were wrong! This modern pipe is still in use and is within 10-15 cm (4-6 inches) of the bottom of the pool. In an effort not to disturb it too much and to get a larger picture of the bottom of the pool, we shifted efforts to the north half of the unit where we found… 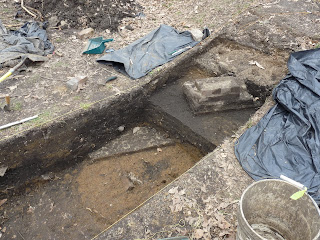 …another part of the wall! This was one surprise of the weekend: this low part of the wall is largely intact, it follows the curve of the wall uncovered in another unit, and perhaps most surprising is that the chunk of the wall higher in the next unit appears to be in its original place, or in situ. The low part of the wall doesn’t seem to be damaged to the extent that one might expect if it were blasted through while installing the drainage. One theory is that Lew Wallace purposely designed it low for a gate or spillway from the pool – quite possible since Wallace had several such structures at his summer home, Water Babble. 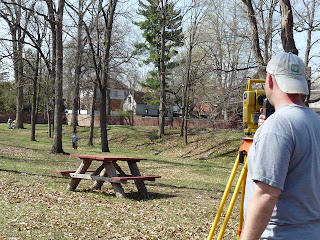 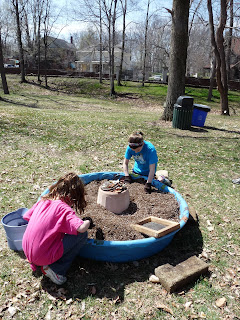 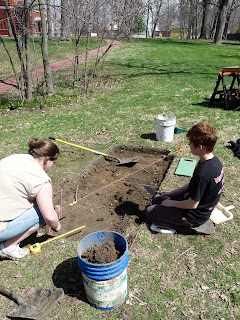 What we didn’t find (yet) was Old John. The search for the horse’s grave is off to a good start, but the crew didn’t get down far enough in the short time. More to dig next time! The next excavation is planned for the last week of May, when UIndy students and faculty will hold a field school here on the Museum grounds. The public will be invited to observe and talk with the archaeologists, but the actual digging will be reserved for the students. The next public History Beneath Us program is slated for September 2011. Depending on what the find in May, we may be able to find other things related to the Wallaces’ life, like a cistern, privy, or kitchen midden. We hope you can join us!