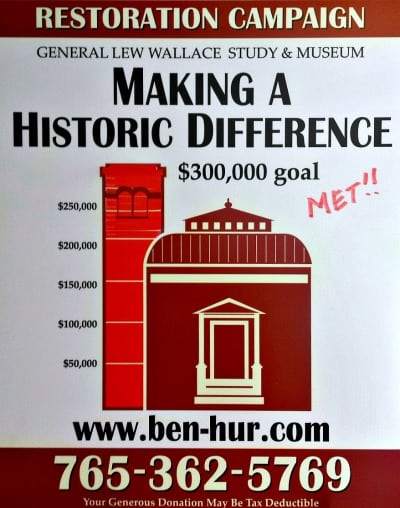 The General Lew Wallace Study & Museum, a National Historic Landmark, is pleased to announce the successful culmination of the Making A Historic Difference Campaign. The campaign began in early 2013 with a generous $100,000 challenge grant from the Jeffris Family Foundation, an organization dedicated to Midwestern Historic Preservation. The foundation supports significant projects that strive for high preservation standards and show a strong degree of broad-based local support. The Jeffris grant specified that fundraising had to be completed by June of 2015. Over 70 individuals and families and 11 organizations and businesses collaborated with the Lew Wallace Study Preservation Society to raise $200,000–meeting the Jeffris Family Foundation’s challenge a year early. Gifts were made from 13 states and 11 communities in Indiana.

The origins of the campaign began in 2011, when a detailed interior paint analysis hinted at an elaborate paint finish dating back to Lew Wallace’s occupancy of the building. As a result of this analysis, conservators were hired to remove nine layers of over-paint to see what might survive from the 1890s.

Once restored and conserved, the Study will feature one of the most elaborate and original Victorian interior finishes available for public viewing in this region. Prior to the conservation and restoration effort, however, a serious structural issue must be addressed—portions of the wiring in the building date back to the 1890s. This wiring must be removed and replaced. The cost of the electrical work, paint conservation, and attendant services is estimated to be $300,000.

Contributions to support the restoration continue to come in. The Cincinnati Civil War Round Table visited on Saturday, June 7, to present a check for $1,500 and tour the Study before the restoration is initiated.

Museum staff is excited to begin preparations for the interior restoration effort. “Our next step is to begin packing up artifacts from inside the Study, like we did in 2011,” said Associate Director Amanda McGuire. “It takes a lot of boxes and bubble wrap to protect all of Lew’s belongings.”

Once the Study collections are packed and stored securely, electrical work will begin. The Study building will be closed during that work, which will hopefully begin in the fall of 2014. After the electrical portion of the project is finished, paint conservators from Indianapolis will return to uncover Wallace’s original paint. It promises to be a fascinating reveal as the art is uncovered.

In an article written in 1900, Chicago teacher Ella Kostanzer wrote of the tromp l’oeil finish, “The border around the skylight is handpainted, designed by the owner. It consists of implements of warfare in groups chained together. We see the shield, helmet, sword, bugle, breastplate, etc…” We look forward to the day in 2015 when visitors will be able to once again enjoy Lew’s military-themed design. The Museum would like to express its appreciation to every contributor to the campaign. Together they helped make a historic difference.

One thought on “Museum Supporters Make a Historic Difference”