Lew Wallace found passion and inspiration in battle at a young age.

“When night came, and my mother tucked me in the little trundle-bed with my elder brother, I had gained such store of wisdom pertaining to war that it passed into my dreams, and from them into my life; so I promised myself, saying many times, ‘Wait until I am a man.’”

American history bears witness to Wallace’s glorious victories and shocking setbacks in battle once he did become a man. To honor his militant spirit, the General Lew Wallace Study and Museum will soon debut its new exhibit, Embattled: General Wallace’s Leadership in the Civil War.

The Lynne D. Hohlbein Education Room in the General’s former Carriage House is being prepared with personal artifacts from Wallace’s career in the Civil War. The exhibit will tell the story of Wallace’s lifelong fascination with military struggle, beginning in his youth watching his father elegantly uniformed as the colonel of a county militia.

Taking a cue from its name, the Embattled exhibit will illustrate not only Wallace’s wartime glories, but also the denigration and loss of reputation he suffered as a result of his missteps in crucial battles. Some reports state that Wallace’s actions—most notably during the battle of Shiloh, Tennessee—may have cost lives.

“Wallace’s Civil War career was fraught with low periods as well as great victories,” said Amanda Wesselmann, Associate Director of the Museum. “We wanted to show a balanced view—not only Wallace as hero, but also Wallace as fallible.”

The Embattled exhibit also marks the first themed exhibit at the Museum that is guest curated. Gail Stephens, historian, author and Wallace Scholar from Maryland, has done extensive research on General Wallace’s military history, especially his actions during the conflicts in Shiloh and Monocacy, Maryland, and is currently writing a history of Wallace’s Civil War career for the Indiana Historical Society Press. Stephens has written most of the interpretive text for the Embattled exhibit and has designed the exhibit to tell the complete story of Wallace’s military history.

“It’s been a great joy to work on the Embattled exhibit,” said Stephens. “In the course of several years of work on my book about Wallace’s controversial Civil War career, I’ve found a lot of new material about the man and his participation in the country’s greatest and most tragic conflict. I believe this portrait of Major General Lew Wallace adds weight and sophistication to previous accounts – and I believe he would see himself in it.”

As in previous exhibits at the Museum, the Embattled exhibit will feature General Wallace’s personal artifacts on display, as well as replica versions of some common Civil War-era materials that can be worn, handled and examined to give children a greater understanding of that era.

“It’s one thing to read about the Civil War in history books and learn how oppressive and scary the conditions sometimes were,” said Wesselmann. “It’s quite another thing to put on several layers of wool uniform and imagine marching for miles in the summer heat. Our goal is to help our visitors put themselves in the shoes of the men and women of the Civil War era.” 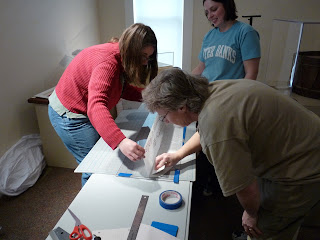 Accompanying this year’s exhibit is a full slate of events and educational programming that revolves around the theme of leadership in the Civil War. The Brown Bag Book Club, returning in June and continuing throughout the summer, will feature selections that explore leadership and success in today’s society (Malcolm Gladwell’s Outliers will be featured in July) as well as during the mid-1800s (June’s featured book will be Confederates in the Attic by Tony Horwitz, and August’s selection will be Team of Rivals by Doris Kearns Goodwin).

The Embattled: General Wallace’s Leadership in the Civil War exhibit will debut with an invitation-only Sneak Preview Party for donors and members of the Lew Wallace Study Preservation Society, held at the Carriage House Interpretive Center on Friday, March 20 at 6:00 p.m. The opening reception will feature remarks by Suanne Milligan, President of the Society, Guest Curator Gail Stephens and Museum Director Cinnamon Catlin-Legutko.

The Public Opening of the Embattled exhibit will take place on Saturday, March 21. Museum admission will be free that day and refreshments will be served. Guest Curator Gail Stephens will discuss her role in the new exhibit in a special discussion at 11:00 a.m. and again at 2:00 p.m. The Study building will also be open to view the new permanent exhibit, The Ben-Hur Legacy, created by Guest Curator Amanda McGuire.

“We’re very enthusiastic about this new exhibit,” said Wesselmann. “Finally, instead of rumors and hearsay, General Wallace’s Civil War leadership will get the balanced examination it deserves.”