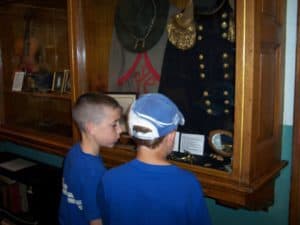 General Lew Wallace Study & Museum staff often act as educators, whether it is with the public or private groups. Often we engage with groups of varied ages. However, recently we have educated elementary school students in topical tours.

For the first time in recent history, almost every second, third, and fourth grade student in Crawfordsville visited the Museum this year. In addition, we saw students from throughout the county and region. To accommodate this influx of students, we introduced a series of topical tours catered to the learning standards of each grade.

The second graders learned about Lew Wallace as an author. We discussed his research and how he learned about the things he wrote. Later, they returned to write stories on the grounds like Wallace did with his world-renowned book Ben-Hur.

The third graders focused on local history and what Wallace did while he lived in Crawfordsville. They also learned what makes the Study a unique building unlike any they’ll see elsewhere. Three architectural styles make up the Study building, which was designed by Lew himself.

The fourth graders looked at what made Wallace important to the state of Indiana: his fame as an author, diplomat, and soldier. Not only did he serve in the Mexican War, but also the Civil War. In fact, during the Civil War, Lew kept the Confederates from marching on Washington, D.C.

All these students got to look at the Study and Museum, but with a different focus for each group, there will be something new to see the next time they come.

We hope they will all come back next year!