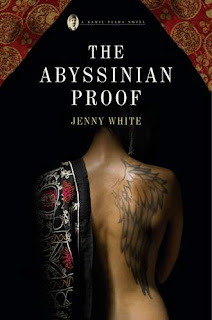 CRAWFORDSVILLE, IN, May 29, 2010— A mysterious, holy grail–like object containing a document with the potential to bring about peace between the different peoples of the world is at the center of the exciting novel The Abyssinian Proof by Jenny White, the first selection for the General Lew Wallace Study & Museum’s annual Brown Bag Book Club. The discussion for this book will take place on Tuesday, June 8, 2010 from 12:00 noon to 1:00 p.m., and participants are invited to bring their lunches for an interesting afternoon dialogue.

Set in late-nineteenth-century Istanbul, this gripping story features city magistrate Kamil Pasha, the protagonist of White’s earlier novel The Sultan’s Seal, who must expose a smuggling ring and recover a stolen reliquary, a box that contains a secret message known as the “Proof of God.”

“Our book club selections are meant to illustrate times and places in history that Lew Wallace would have been familiar with,” said Amanda Wesselmann, Associate Director of the Museum and leader of this month’s discussion. “The Abyssinian Proof is fiction, but since Lew Wallace was U.S. minister to the Ottoman Empire during the early 1880s, the descriptions of the area and the historical events of that time were in line with what he experienced.”

The Abyssinian Proof and future Brown Bag Book Club selections can be purchased at the General Lew Wallace Study & Museum Gift Shop for 10% off the cover price. For questions about the Museum’s exciting summer of events, contact the Museum at 765-362-5769 or visit www.ben-hur.com.