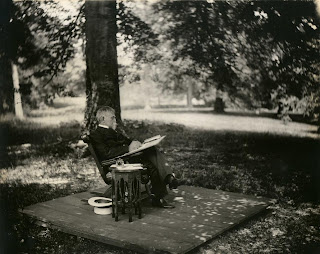 What is the appeal of watching someone else talk about a place that looks nothing like it used to?

Recently, my husband spent days watching every commentary and special feature on a special edition documentary about a popular series of horror movies. The parts that I saw consisted of some of the cast and crew of the different films in the series go to the locations where the movies were made and point out which scenes were made where.
Some of the places hadn’t changed in almost 30 years; others, however, were constantly described with, “It doesn’t look like it now, but there used to be…” During several of these types of “tours,” I kept glancing at my husband and was a bit confused that he was riveted to the screen as the actor described what used to be there.
Then it struck me: this was authenticity, packaged up for home viewing. This was a figure of authority (the cast and crew of the films) relating the physical location to scenes the audience knew and telling behind-the-scenes stories of what happened there.
This was, in essence, a visit to a museum on DVD! The cast and crew were doing their best to convey authenticity and a sense of place, things that drew in fans of this series. And if it’s this intriguing at home, how captivating is it when you can actually visit the place and see the real artifacts!