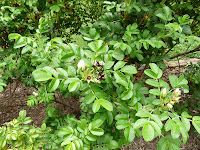 Summer has arrived and war has been declared! Battles are being fought… and lost. Unfortunately, the war is likely to last for months.
Japanes beetles, Popillia japonica, have invaded. They first appeared the last week of June and their numbers are increasing. The iridescent copper-colored beetles with green heads are eating their way through the gardens. The rugosa roses and morning glories are being totally demolished. Canna, with their thick leaves are another favorite meal for the beetles. The skeletonized foliage of these plants are a sorry sight to see for our visitors. The beetles make their appearance for 6-8 weeks and have no natural enemies. I chose not to spray with insecticide and usually brush the beetles off onto the ground. Thankfully I know in a few weeks they will disapear.
Another losing battle being fought is with poison ivy. Poison ivy, Toxicondendron radicans, has shown up in every garden this summer. In the previous years, the poison ivy has been under control. In the late spring, seedlings started to appear. Soon, the seedlings were sprouting up in the lawn, gardens, and vining up trees. Poison ivy will grow in almost any conditions, sun or shade, moist or dry, between rocks and on trees. I can only surmised that birds have distributed the seeds all over the grounds. 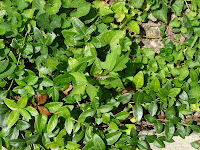 With over 70% of the population having sensitivity to poison ivy, I have pulled and sprayed whenever and wherever I have seen the plant. All parts of the plant are allegens and even in the winter, contact with dormant roots can cause a reaction. As the old farmer’s tale says, “leaves of three, let it be!”