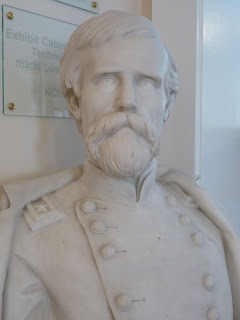 Throughout his life, Lew Wallace had a deep interest in the creative arts. He created original works of art and acquired works by others. One of the most recognizable works he acquired was a bronze bust of himself created by the famed American sculptor, Randolph Rogers.

Randolph Rogers signed the bust and dated it 1862. Jules Berchem of Chicago cast the bust. Who actually commissioned the bust and how it came to Wallace is unknown. It remains, nonetheless, one of the most important works of art in the collection.

Randolph Rogers was born in Waterloo, New York, July 6, 1825. He grew up in Ann Arbor, Michigan, and moved to New York City at about the age of 20. Various accounts have Rogers moving to New York to pursue a career as a magazine illustrator but ultimately finding work in a dry goods store. Some accounts say a department store.

At any rate, his employers discovered his aptitude for carving. They promptly financed his 1848 trip to Florence, Italy, so that he could pursue formal training. In Florence, he studied at the Academy of Saint Marks with Lorenzo Bartolini.

When Bartolini died in 1850, Rogers moved to Rome and established his own studio. It appears he may have returned to New York for a brief period, but for most of the rest of his life he lived and worked in Rome.

Rogers quickly established a reputation as one of the outstanding and most prolific American neoclassical sculptors of his generation. In 1852, he had a sculpture entitled “Night” exhibited at the National Academy of Design in New York. Although this work has been lost, it was very well received.

He followed this work with one entitled “Ruth Gleaning” in 1853. The enormous popularity of this statue led to his receiving the commission for the main entrance doors of the U.S. Capitol. The bronze doors stand seventeen feet tall and weigh an impressive 20,000 pounds. Called the Columbus doors, they represent scenes from the life of Columbus in bas relief.

Throughout the 1850s, Rogers largely created works of mythical subjects in a neoclassical design or portrait busts. Perhaps his most popular sculpture was “Nydia, the Blind Flower Girl of Pompeii.” He sold almost 100 copies of this particular statue. Some consider it the most popular American neoclassical sculpture ever created.

Just prior to the Civil War, Rogers received a commission to complete the Washington monument that stands in downtown Richmond, Virginia. This monument had been left unfinished by Thomas Crawford, its original designer. This was a fortuitous commission for another reason, because in 1857, during his time in Richmond, Rogers married.

Around this time he was also completing a statue of John Adams in Mount Auburn Cemetery in Cambridge, Massachusetts, and “Angel of the Resurrection” for the Samuel Colt monument in Hartford, Connecticut.

By 1863, Rogers was beginning to receive commissions for busts and statues relating to the Civil War. In just a few years, he became the preeminent sculptor for Civil War memorials and statues with notable commissions like the Soldiers Monument in Gettysburg, the Michigan Soldiers’ and Sailors’ Monument in Detroit (considered among the first large scale commemorations of the Civil War by a large city), an impressive statue called “The Sentinel” for Spring Grove Cemetery in Cincinnati, a statue of Abraham Lincoln for Philadelphia and one of William H. Seward in Madison Square Park in New York. In keeping with the Civil War commissions he was receiving at this time, he created the bust of Major General Lew Wallace in his Civil War uniform.

Rogers was chosen in 1873 to teach sculpture at the Academy of Saint Luke in Rome. He was the first American to be so honored. In 1882, he suffered a stroke which paralyzed him. Rogers was never able to work as a sculptor again. In 1884, he was awarded the order of the Caviliere della Coronoa d’Italia, an honorary knighthood bestowed in recognition of service to the Italian Republic. 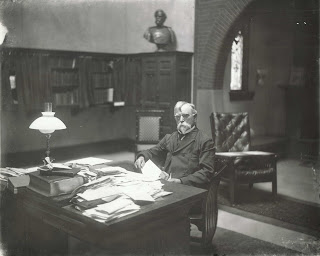 Randolph Rogers passed away in Rome on January 15, 1892. Among the museums in America that boast works by Rogers are the Metropolitan Museum of Art in New York, the Museum of Fine Art in Boston, the Detroit Institute of Art, the National Gallery of Art and the Smithsonian in Washington, the Brooklyn Museum/Luce Center for American Art, the Philadelphia Museum of Art, the Los Angeles County Museum of Art and, closer to home, the Indianapolis Museum of Art, which has it’s own version of Roger’s famous “Ruth Gleaning.”

With the bust of General Wallace created by Randolph Rogers as part of our art collection, the Study is in good company.