During a visit today from Nicholson Elementary second-graders, we showed a few artifacts relating to Lew Wallace’s occupation as an author. One object was a notebook Wallace used to jot notes, keep accounts, and draft correspondence. Below we have included images and transcriptions as we read them (General Wallace’s handwriting is not always easy to make out, and the spelling is at times inaccurate). 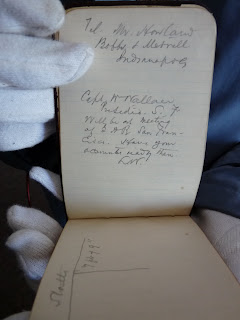 Wallace drafted this telegram to Mr. Howland in Indianapolis. As far as we can make out from Lew’s hasty handwriting, it reads, “Capt W Wallace Presidio. S. F. Will be at meeting of GAR San Francisco. Have your acounts ready then. L.W.” Notes on other pages refer to plantings and itemized accounts for labor and materials. Some, like the bottom page pictured in the photo, include dimensions for spaces (“7 ft + 9″” is pictured here) – perhaps Lew was planning gardens around his home and Study? 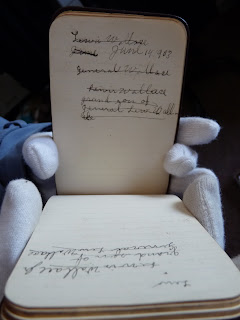 A few years earlier, dated June 3, 1899, a child (we assume Lew Wallace Jr., who was born in 1892) began a letter to his grandfather: “Dear Bumpa We went out rideing yesterday an…” Our guess is that Bumpa, or Grandpa, interrupted the little writer and we will never know what happened during the riding excursion!