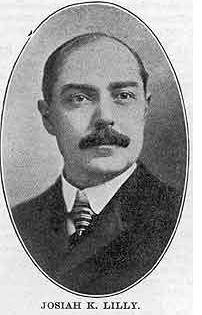 Josiah K. Lilly, Sr., was a generation younger than Lew Wallace. Despite that, the two men shared a great friendship. Josiah’s father, Eli Lilly, served as a colonel in the Civil War and founder of the pharmaceutical company. Josiah received his college diploma in pharmacy in 1882. In the fall of that year, he married a second cousin named Lilly Ridgely (making her Lilly Lilly). Josiah had a keen interest in the mixing of medicines. However, as the Lilly enterprise grew, he shifted into managerial positions and joined the Board of Directors.
Around the turn of the century, Josiah and Lew Wallace went on a duck hunting trip. One morning, Lew woke up with a severe stomachache. Immediately, Josiah jumped into action. He dug some Hydrastis canadensis roots (more commonly known as Goldenseal) he had seen near the duck blind. Josiah ground the roots in whiskey, tasted the brew and, named it Yaller Root Bitters. Then he gave the drink to the ailing General.
According to Lilly, the results were highly satisfactory and he stated: “I do not believe the General was more enthusiastic over his capture of Fort Donaldson in the Civil War.” In his memoirs, Lilly failed to note just how large a medicinal dose Wallace took prior to his enthusiastic response. After taking the cure, Wallace always referred to Josiah as “Doctor.”

According to Wikipedia, Goldenseal is often used as a multi-purpose remedy and is thought to possess many different medicinal properties. It can act as a topical antimicrobial. In addition, taken internally it serves as a digestion aid. Goldenseal may remove canker sores when gargled. It is often used to boost the medicinal effects of other herbs it’s blended or formulated with. Wikipedia does not address the medicinal boost offered by mixing Hydrastis Canadensis with whiskey and a couple of duck hunters.

Information for this Tidbit from: All in a Century: The First 100 Years of Eli Lilly and Company, by E.J. Kahn, Jr.

One thought on “Lew Wallace and the Doctor”