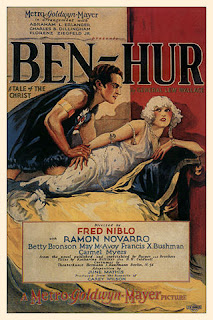 At almost four million dollars, the 1925 silent film of Lew Wallace’s Ben-Hur is the most expensive silent movie ever made.

Expenses for the movie began in 1919, with MGM’s initial negotiations with Henry Wallace. They also had to negotiate with Abraham Erlanger, producer of the successful stage play. Eventually, Erlanger concluded a deal for generous profit participation and total control over the production.

Costs accelerated in 1923 when filming of the movie began in Italy. Accidents, changes in directors, and corporate mergers, hampered production and increased costs. In addition, changes in cast, including the hiring of Ramon Navarro as Judah Ben-Hur. Navarro replaced George Walsh, hired to play the title role. Walsh traveled to Italy, but he felt he deserved better treatment and went home in a huff.

The MGM publicity machine continued its promotion, emphasizing the quality of the production. In the meantime, the sea battle was increasing production cost. The ships were actually set on fire for the scene. As the actors, wearing heavy costumes, jumped overboard to escape burning ships, they had to be rescued from drowning. Horses were being maimed and killed with alarming regularity because of the punishing demands placed on them. Even set production added to the costs. Italy’s new leader, Benito Mussolini, delayed construction of the elaborate sets built by Italian craftsmen.

Moving the Silent Film to Hollywood

In a bold move, Irving Thalberg, MGM’s head of production, closed the Italian operation. He moved the entire effort to Hollywood to contain costs. This was an early instance where the “business side” of show business significantly curtailed the “show side.” Because of the cost overruns in Italy, for decades after Ben-Hur, most movies were mounted on Hollywood’s back lots so that the businessmen could keep an eye on the productions and their bottom lines.

Filming ran from October 1923 through August 1925—almost two full years. This lengthy filming and final editing of the movie also added to the expenses. For instance, 42 cameras were used and over 200,000 feet of film was shot for the chariot race. The final cut of the movie, however, only included 750 feet of the filmed race.

Also, sections of the movie boasted an early 2 tone version of Technicolor using red and green filters. While not the first movie to boast color sequences, this early use of the technology raised its production value and audience interest.

Filming the Chariot Race in Hollywood

The enormous chariot race arena was constructed at what is now the intersection of Venice and La Cienega Boulevards in Los Angeles. The chariot race sequence was filmed in one day and MGM made the most of it. They made the day of filming a holiday for the studio, which gave the day a circus-like feel.

With the exception of the leading men, Ramon Navarro and Francis X. Bushman, the other titled characters from the movie are today largely unknown. However, because of the holiday, established stars made special appearances in the crowd scenes. To learn more about appearances from John and Lionel Barrymore, Joan Crawford, Marion Davies, Douglas Fairbanks, John Gilbert, Dorothy and Lillian Gish, Harold Lloyd, and even America’s sweetheart—Mary Pickford, read 1925 Ben-Hur and its Cast of Unknowns. The audience rooting for Judah weren’t all matinee idols, either. Samuel Goldwyn and Sid Grauman (of the Chinese Theater) also showed up on screen rooting for Judah.

The movie earned over nine million dollars in its original run; however, studio executives didn’t consider it a financial success. The production and promotion costs and Erlanger’s profitable deal simple cost too much. In subsequent releases, the silent film continued to make money for the studio. More importantly, the 1925 Ben-Hur cemented MGM’s reputation as the quality studio in Hollywood. This reputation helped Thalberg and his associates leverage other successful projects and, for the next three decades, allowed MGM to attract more stars than there were in the heavens.

2 thoughts on “Ben-Hur 1925: The Most Expensive Silent Film Ever Made”