The impact of the Civil War was felt in many ways. One of the more unusual was in the passion that developed for spirit photography, a process in which photographers were able to capture the image of a ghost or other spiritual entity. Photography was still a relatively new and a quickly evolving art form in the 1860s. During the War, photographer William H. Mumler was surprised when he developed one of his glass plate negatives and found a second person in the image that he took of himself.

Mumler realized two things in short order. First, that the photograph resulted from a simple double exposure. Second, that there was a market for people desperate to reconnect with those who had died.

Mumler built a brisk business taking spirit photos including a famous image of Mary Lincoln with her martyred husband, Abraham, standing behind her. Mumler did very well until he accidently included images of people still very much alive and walking around on the streets of Boston in some of his photographs and he was exposed as a fraud. In spite of Mumler’s fall from grace spirit photography had gained traction and continued to be a much debated topic throughout the late nineteenth and early twentieth centuries. Among the most ardent supporters was Sir Arthur Conan Doyle while one of the most strident critics was Harry Houdini.

Henry Wallace, son of Lew Wallace, was a gifted amateur photographer and a number of the photographs we have in the collection of Lew Wallace and his grandchildren were taken by Henry. Beyond these wonderful images of the family on the grounds of the Study, we have a spirit photo in the collection. According to penciled information on the back, he took this photograph in the office of the Blancherne apartment building in Indianapolis owned by the Wallace family. The information reads: “Spirit” photo taken by HLW who was the only person who touched the plate. Taken in Blacherne office with his own camera in presence of Jno [Jonathan] Nicholson, Nethery, and the medium Frank Foster.” In this slightly blurry photograph a woman’s head is seen floating in an upper corner. 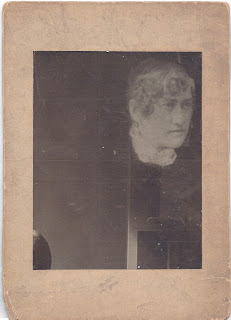 We don’t have much information about the woman, Jno Nicholson, or Nethery. However, in certain circles, Frank Foster is still known. He was a renowned spiritualist from Grand Rapids, Michigan. He had a following of believers around the turn of the 20th century. In his book, Photographing the Invisible: Practical Studies in Spirit Photography, (1911) Phil Coates cites a number of spirit photos taken by Foster as well as “spirited” stories. By 1904, Foster had travelled the country and produced spirit photos for approximately 40 years. In the Coates book there is a lengthy interview with Judge Levi Mock of Bluffton describing his experience with Foster.

Foster was at “the Chesterfield Camp” when Judge Mock approached him for a photography session. Foster charged $2.00 for a photo. Mock first sat for the picture, then Foster put his hand on the camera. Mock placed his fingers on top of Foster’s hand on the camera and, after much “quivering,” an electric shock passed between them. A few days later Mock received his picture with several images of people he did not know.

Mock took the photo to a Mrs. Herbine who was a gifted “slate writer.” Mrs. Herbine told Judge Mock that his father in the Summerland (afterlife), wanted Mock to return to Foster for another sitting. In this new photograph by Foster, Mock recognized four of the spirit images. With his picture in hand, Mock returned to Mrs. Herbine. With him, he brought a series of questions for the spirits to answer to authenticate their images. Mock prepared what he believed to be a double blind approach to garnering answers. Mrs. Herbine was able to slate write the correct answers. Case closed for Judge Mock—he was a true believer.

We don’t know the date of the Wallace spirit photo, but it probably dates from about 1904, the same time that Judge Mock was having his experiences with Foster. It would be interesting to know who the mystery woman is. Why did Henry met with Frank Foster in the first place? How they came to set up a photography session at the Blancherne? What did Henry think of the results of this session? When it came to spirit photography did he side with Sir Arthur Conan Doyle or Harry Houdini? If only Mrs. Herbine was still available!

2 thoughts on “Henry Lane Wallace and his Spirit Photo”