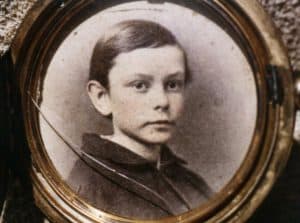 In honor of the Strawberry Festival on the grounds of Lane Place in Crawfordsville this weekend, we thought it would be appropriate to consider one of our many ties to the Lanes. Summer intern Kasey Greer found this excerpt about Lew’s family life. Lew held strong opinions and acted as an authoritative military leader. However, he didn’t always get his way on the home front.

“In early 1853, Lew and Susan Wallace were in Covington, Indiana, eagerly anticipating the birth of their first child. Writing to his brother, William, Lew explained his reasoning about child names. Lew parodied the names of his father and brothers when he wrote:

“I think I had better right here quietly observe, that the fellow’s name shant be David, that’s too plebian – nor William, that’s very pretty for a child, but unfit for a man, nor Edward, that’s too pretty for either man or baby. I have determined that the most aristocratic and democratic, the most semantic and unpedantic the most noble, manly, appropriate and significant of all that ‘best becomes a man’ is – ‘Lew.”

“However, Lew failed to convince Susan of the name ‘that best becomes a man.’ For on February 17, 1853, Susan gave birth to a son and he was named after his uncle, Henry Lane. Another factor figuring into naming the boy is that it was a common nineteenth century practice to name a child after a military commander and Lew Wallace had served under Henry Lane during the Mexican War.”

Later, when Henry Wallace was a married man, he named his older son Lewis Wallace, Jr. A generation later, Lew got his way.