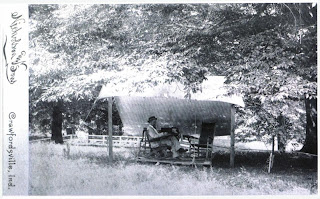 Lew Wallace created many things during his lifetime, from art to inventions to his Study. Many consider writing to be his greatest achievement, especially since he described in his autobiography that he hated school and frequently skipped class. Well, perhaps he should have applied himself to a few more vocabulary lessons…

When the first few chapters of Ben-Hur were published as a separate volume titled The First Christmas, Wallace wrote the preface describing his writing process. A lack of knowledge of the historical circumstances surrounding the birth of Christ compelled Wallace “to study everything of pertinency; after which, possibly, I would be possessed of opinions of real value.” Unfortunately for the world-renowned author, “pertinency” isn’t actually a word; he should have used “pertinence”.

We could overlook that near-miss, but Wallace just plain made up a word elsewhere in the preface. He described walking to his brother’s house from a train station: “The street-cars were at my service, but I preferred to walk, for I was in a confusion of mind not unlike dazement.” Dazement? Apparently he was so confused that he couldn’t come up with a word that already existed!

I guess famous authors not only get to build their own studies, they also get to invent words.