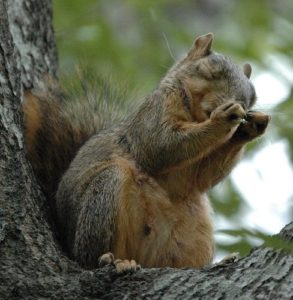 When something of interest landed on Lew Wallace’s radar, he just couldn’t leave well enough alone. Late in life he purchased acreage outside of town. There he created his country home, Water Babble, where he began improving the property. He planned to create a fish hatchery. This wasn’t his only foray into animal husbandry.

Our visitors often comment on the large size and reddish color of the squirrels here. The squirrels on the Study grounds look a little different than their downtown neighbors for a reason. As reported in the Crawfordsville Journal on July 15, 1901:

“After four years of trial General Wallace has located a splendid colony of fox squirrels in the big forest trees about his residence. The pretty little animals and their young can be seen at all hours frisking about the lawn and they are jealously guarded from dogs and the air gun boy.”

Perhaps General Wallace wanted his squirrels to match the Study in color. Whatever the reason, after 110 years, the descendants of the General’s efforts at selective breeding still frisk about on the lawn.