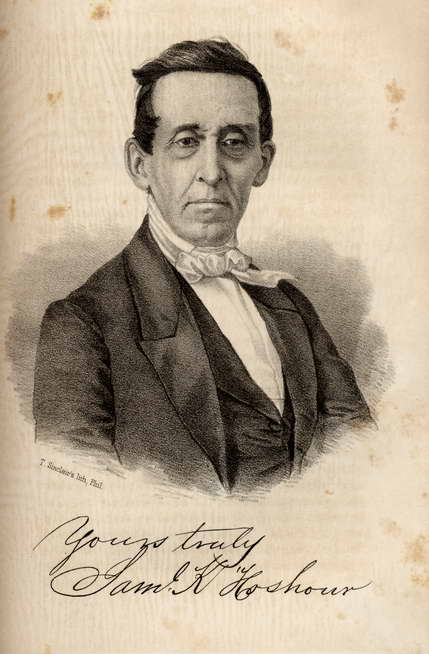 Sometimes history remembers an educator less for their accomplishments than for the history made by their students. Such is the case with Samuel K. Hoshour. In 1840, when Lew Wallace was 13 years old, his father, David, once again sought to impress the importance of education.

David sent Lew to school in Centerville, Indiana. (Some reports report that the school was actually located nearby in Cambridge City.) This area of Wayne County had been settled by whites beginning in 1814. Its significant population of Quakers held fast to their traditions of anti-slavery and the value of education. By 1827, the Wayne County Seminary was built. For more than 50 years it served as an institution of higher education.

The Methodist Church purchased the Seminary and renamed it Whitewater College. Reverend Cyrus Nutt served as the college’s president in the 1850s. Nutt would later go on to serve as president of Indiana University. In addition to Lew Wallace, among the distinguished individuals educated in Centerville were Ambrose Burnside (Civil War general), John Stevenson Tarkington (father of Booth Tarkington), Emily Meredith (mother of Meredith Nicholson), and Oliver P. Morton (Indiana’s Civil War governor).

David sent Lew to Centerville because of Professor Samuel K. Hoshour’s great reputation as an educator. Professor Hoshour deserved this reputation, at least in Lew Wallace’s eyes. Hoshour was born in York County, Pennsylvania, in December 1803. He trained for the ministry in the Lutheran Church, but converted to the “Campbellite Doctrine.” As a result, his church ostracized him. He travelled west with his wife and settled in Wayne County, Indiana, in 1835. There, he quickly developed a reputation as an outstanding instructor and intellect. He could read five languages and speak three fluently.

Hoshour came nearest to being what young Lew imagined as an ideal school master. While Hoshour wielded the rod, he did so with “discrimination and undeniable justice.” Wallace wrote: “He was the first to observe a glimmer of writing capacity in me. He gave me volumes of lectures on rules of composition, English, and style.” Hoshour invited Wallace to his home in the evenings to give Lew extra help with the thorny and perplexing problems of algebra.

Hoshour recognizing that Wallace did not have an aptitude for mathematics. Rather than beating him, Hoshour humanely applied himself to cultivating the abilities within Wallace’s reach. In an evening’s interview with the student who could not find his way, Hoshour recognized Wallace’s native intellect and his interest in reading and self education.

The Professor presented Wallace with lectures on rhetoric by John Quincy Adams, containing rules for composition. Wallace went on to write that Hoshour took a New Testament and gave it to him. Hoshour said, “There, read that! It is the story of the birth of Jesus Christ. This was entirely new to me and I recall the impression made by the small part given to the three wise men. Little did I dream then what those few verses were to bring me—that out of them Ben-Hur, was one day to be evoked.”

Hoshour taught in Centerville and Cambridge City for eleven years. Because teaching didn’t pay well, he attempted to earn a better income. Unfortunately, with health issues beginning in the 1840s and a series of poor investments, he was forced to return to teaching. In 1855 he joined the faculty of Northwestern Christian University (today’s Butler University) in Indianapolis. In 1858, he became president. However, after three years, he left the presidency and resumed teaching at the university. In 1862, he was appointed State Superintendent of Education. After a distinguished career in education, he passed away in 1883 and was buried in Crown Hill Cemetery in Indianapolis.

As Wallace wrote in his autobiography: “I can see the professor standing in his door, lamp in hand and bareheaded, dismissing me for the night, with exactly the same civilities he would have sped an official the most important in the state. Ah, the kindly cunning of the shrewd old gentleman! He had dropped a light into my understanding and caught me. So, step by step, the professor led me into and out of depths I had never dreamed of, and through tangles of subtlety and appreciations which proved his mind as thoroughly as they tried mine. Before the year was out he had, as it were, taken my hand in his and introduced me to Byron, Shakespeare, and old Isaiah. The year was a turning-point of my life, and out of my age and across his grave I send him, Gentle master, hail, and all sweet rest.”

Every educator who has sparked the imagination of a student would appreciate Wallace’s remembrance of the teacher who changed his life and changed history.

One thought on “Samuel K. Hoshour and Lew Wallace”