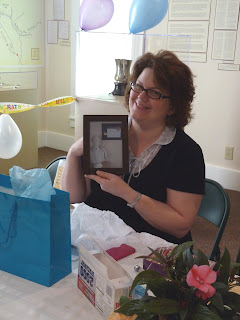 After a long good-bye, the staff at the Museum has bid a fond farewell to Cinnamon Catlin-Legutko, Museum Director for the past six years. During her time here, Cinnamon propelled the professionalization of the Museum and brought a tiny place in a small town to the attention of the nation. She spearheaded projects that earned the National Medal from the Institute of Museum and Library Services last fall.

Now Cinnamon moves on to greater challenges as CEO of the Abbe Museum in Bar Harbor, Maine, where she will lead a team twice the size of the one here (seven people!). As much as we will miss her daily presence, we send her to Maine with our best wishes, and a reminder that between cell phones and Facebook, she can run but she can’t hide.