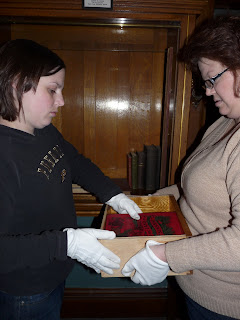 “You guys changed some things around in here.” That has been a common refrain from visitors who return – even if they were here just a year ago! In our continuing efforts to return the Study interior to its appearance ca. 1900, the heyday of Lew Wallace’s use of the building, we have rearranged dozens of artifacts, and put out some of Wallace’s books that have not been on exhibit in years. Not only does this provide a more immersive experience than ever – it’s more like the General just left! – it also gives a window into Wallace’s mind. You might expect a literary giant interested in other cultures to own books like The Aeneids of Virgil or the Kalevala, but volumes such as The Science of Wealth and The Art of Living Long suggest a very different, and much more human, dimension.