One of the worst sights to see when working in a historic building is water pouring in from the ceiling. This was a common occurrence a few years ago anytime it rained. We had to set out several buckets to catch the water and hope that the storm would be over soon. Thankfully, we haven’t seen this since we replaced the original copper roof in 2010.

We found out recently that the second worst thing to see when you walk into your 119 year old museum is a squirrel sitting on the desk of one of Indiana’s most famous authors! This is exactly what museum director Larry Paarlberg saw when he went to close the museum one day this spring. 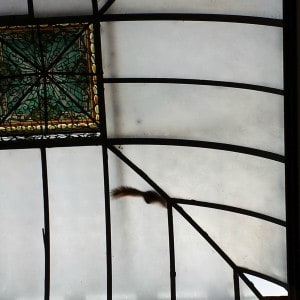 Apparently one of the resident Study squirrels (let’s call him Fred) decided to make his home inside the cupola of Lew’s private retreat. Maybe he decided to find better shelter because of the harsh winter or just wanted the challenge of scaling 25 feet of smooth brick, a curved copper roof, and playing Russian roulette with a fan to gain entry.

This particular day Fred stepped on one of the Plexiglas panels (the original glass ones were removed years ago) causing the panel to shift and fall 30 feet to the concrete floor of the Study, taking Fred with it. The panel and squirrel both survived but I think Fred was a little dazed.

Upon discovering the squirrel on the desk, Larry proceeded to open the front and back doors of the Study, hoping to provide an escape route. Fred, dazed as he was from his fall, ran up a curtain to the top of the bookshelf and ran behind all of the artwork and objects on display – any museum professional’s worst nightmare! He finally came down, ran to the mechanical room and down the stairs to the basement. Keep in mind that during all of this he had to pass both the open front door and back door. Fred is clearly not the brightest squirrel ever.

Larry called for reinforcements with flashlights to help get him out of the basement. Larry and Amanda shut the door at the bottom of the stairs so Fred couldn’t make it back to the main room and opened the exterior basement door, hoping the squirrel would leave on his own. They looked and looked but couldn’t find Fred so assumed he had made his escape.

The next morning, Deb went to the basement and there was Fred peeking over one of the steel beams. She left the exterior door open throughout the day and he did finally leave, but that was not the last we saw of Fred. Later that same week, Deb caught a glimpse of him running around in the cupola again! This led to Stephanie, Deb, and Amanda making a trip up the tower to look at the cupola, see how Fred was getting in, and find a way to stop it.

There is a fan in one of the windows of the cupola to help cool the dome. The wind blows the louvers open allowing enough room for a sneaky squirrel to slip through (the fan doesn’t run all of the time). We took some measurements and pictures and Deb and Larry climbed back up a few days later (on an extremely windy day) to build a cage with hardware cloth around the fan.

We didn’t see or hear Fred in a few days so we thought he was gone. We hoped he would stay gone. But Friday, Fred was spotted inside the dome again!

Stay tuned for an update on Fred’s fate…

2 thoughts on “Squirrels in the Study”