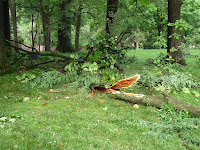 Summer has arrived with all the fireworks of the fourth of July. On June 21st and 22nd a severe storm hit the city of Crawfordsville, with lightning, straight line winds and torrential rain. Over 3″ of rain fell overnight, filling the former moat and reflecting pond of the Study. Runoff streams ran throughout the museum’s grounds. We were fortunate that the buildings did not sustain any damage.
The parking lot was filled with large and small limbs. The museum’s grounds were littered with debris from a variety of trees. A large Kentucky coffee tree limb fell, breaking off a nearby tulip limb. One of the sassafras lost a large limb and several tulip trees lost their tops. This scenario played out all over the area.
The sound of chainsaws has permeated the air for the last 2 days. The museum cleanup has begun and the debris will be taken to the local compost site. Hopefully, the grounds cleanup will be finsihed just in time for the award winning Lew Wallace Academy and Civil War Encampment. July 6th through July 11th the museum grounds will be swarming with children and Civil War Reenactors.