Welcome to the walking tour of the General Lew Wallace Study & Museum grounds! 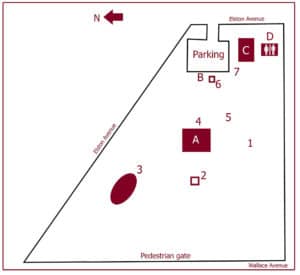 Lew Wallace was born in Brookville, Indiana, in 1827. He fought in the Mexican War before becoming a lawyer. He practiced in Indianapolis, then became the Fountain County Prosecutor in Covington, Indiana. In 1853 he married Susan Elston. The next year, their son Henry was born. The Wallaces moved to Crawfordsville later that year.

Lew Wallace’s accomplishments stretch much further than his 77 years. He became a Major General in the Union Army who led his troops in the decisive Civil War battles of Shiloh, Monocacy, and Fort Donelson. He served as a military judge in the trials of the Lincoln Conspirators and Commander Wirz of Andersonville. President Garfield appointed Lew ambassador to the Ottoman Empire. In addition, Lew was a brilliant author, orator, artist, inventor, and musician.

Today, the General Lew Wallace Study & Museum has preserved General Wallace’s personal memorabilia. He designed and built his Study in 1895 on the site where Ben-Hur was penned. Each year, the Museum presents educational and entertaining programs for all ages that demonstrate the qualities of leadership, ingenuity, exploration and character that General Wallace embodied throughout his life.

Lew Wallace’s Study is located in the Elston Grove Historic District. In 1824, Major Isaac Compton Elston settled the district, which originally consisted of 40 acres. Elston was Lew Wallace’s father-in law and one of the wealthiest men in Crawfordsville. He acquired the land on the eastern edge of Crawfordsville and settled there with his wife Maria and their nine children.

Major Elston played a vital role in bringing the railroad to Crawfordsville. The town’s first railroad crossed the northeast part of Elston Grove. After 1860, Elston Grove was parceled out for the Elston children to build their own homes. The Elston Homestead now belongs to Wabash College.

After Major Elston’s death in 1867, a large parcel of land on the eastern edge of the grove became a semi-public park. Lew and Susan built their home in 1868.

Walking Tour of the Study Grounds

The property is set apart from the neighboring residential area by a brick wall built by order of Wallace’s son, Henry. The brick wall ranges from six to ten feet in height. Within the walls is a park-like setting with rolling grounds and a ravine on the west side.

In Wallace’s day, an arboretum grew on the grounds. He enjoyed sitting and writing under his favorite tree, later called the Ben-Hur Beech.

The following walking tour pages match the numbers on the map.

The Study grounds are home to a hidden geocache. If you are a geocacher, make sure you check it out! We also have several spots in Pokémon Go.

If you’re interested in seeing the interior of the Study building, come to the Carriage House at the east end of the property. All tours are paid, guided tours. See our Plan Your Visit page for more information.