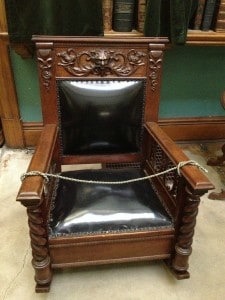 I’m often asked about this rocking chair in the Study. It doesn’t look as if it would be very comfortable, thanks to the face carved on the back. The nose would probably poke the hapless sitter in the middle of the back!

But whether or not the chair would be comfortable, it is certainly ornate and intriguing. Why is there a face carved on the back? Is there some meaning to it? Where did the chair come from?

We don’t have much information in our archives about the history of the chair, but the carved motif is very similar to one that can be found throughout Europe–that of the Green Man.

Depictions of faces surrounded by foliage, or with foliage coming from their mouths, can be found dating back as early as the Eleventh Century in England, and dating back to the First Century in Rome. There might be a link between the Green Man and the Greek gods such as Dionysus, Silvanus, Bacchus, and Pan. Celtic deities such as Cernunnos and the Oak King and Holly King may also be represented in these figures.

Whatever the symbolism, Lew must have appreciated the workmanship of this chair…even if he found it uncomfortable to sit in.