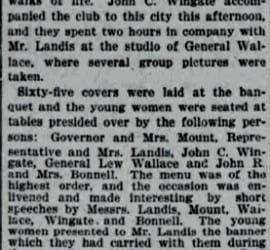 We had a fun little research project today and learned something new about Lew. I wanted to share it with all of you so you get a glimpse behind the scenes at how we are still learning stuff about Lew’s history. One of our members kindly brought a picture for us to […]

Lew Wallace knew each of the three American presidents assassinated during his lifetime. Abraham Lincoln had known Wallace and members of his family for years and was personally involved in aspects of Wallace’s Civil War career. James Garfield had come to know Wallace during the Civil War, through Republican Party […]

What was Lew Wallace’s political affiliation? Looking to his Autobiography, Wallace grew up “intensely Whig.” His father belonged to the Whig party during his time as governor and state legislator. Wallace carried on these political views until the personally crucial election of 1848. This election found General Zachary Taylor, among […]